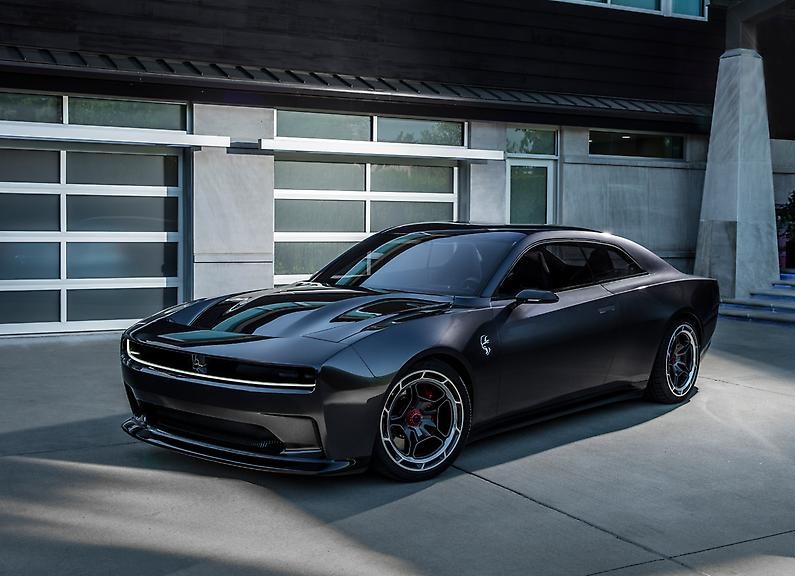 There are some changes coming to the Stellantis lineup in the form of new electric vehicles (EVs) and battery-electric vehicles (BEVs) from some of our favorites. All of the major automotive groups have an EV plan for 2030, and the Stellantis Dare Forward 2030 plan has the goal of launching 75 BEVs over the next six years, with an all-electric Jeep SUV and an all-electric Ram 1500 already planned to launch within the next year or two. Dodge eMuscle was also a surprise, and recently revealed two new electrified entries into the lineup during Dodge Speed Week at at M1 Concourse in Pontiac, Michigan. Starting off the electrified lineup is the 2023 Dodge Hornet PHEV, a plug-in hybrid and a year ahead of schedule, but the real all-electric entry taking the name and logo of the Dodge eMuscle lineup is the two-door Dodge Charger Daytona SRT Concept.

Be still my heart, the iconic two-door Dodge Charger Daytona is coming back with SRT performance and an all-electric power system. Now that is something we’d definitely like to see. Maybe insurance agencies will be less likely to increase the price with a battery-electric vehicle (BEV) from Dodge, but high performance is high performance. This BEV concept already boasts the sound of an SRT Hellcat with a 126 decibel roar from the electric motor and a new, patent-pending Fratzonic Chambered Exhaust system.

“The Dodge Charger Daytona SRT Concept exists because performance made us do it…Dodge is about muscle, attitude and performance, and the brand carries that chip on its shoulder and into the BEV segment through a concept loaded with patents, innovations, and performance features that embody the electrified muscle of tomorrow…it will redefine American muscle in the process.” - Tim Kuniskis, Dodge brand chief executive officer – Stellantis

A new propulsion system will be powering the EV concept, called the 800V Banshee, and is very different from the plug-in powertrain previewed in the Dodge Hornet. This plug-in hybrid (hatchback?) is powered by a 1.3-liter turbocharged all-aluminum engine, part of the Stellantis Global Small Engine (GSE) family, and able to deliver a segment-leading output of 285-plus horsepower and 383 lb-ft of torque. Paired with a 90-kW electric motor powered by a 15.5-kWh lithium-ion battery pack, able to deliver with 1,844 lb-ft of torque at 0 RPM, the PHEV is already worthy of the Brotherhood of Muscle name. Both have the PowerShot feature to increase horsepower for 15 seconds with a 15-second cooldown period (25 horsepower reported for the Hornet).

Both vehicles are calling back to Dodge Heritage with their styling cues, but the new Dodge Charger Daytona SRT Concept really goes beyond with a new R-Wing aerodynamic pass-through design that matches the iconic Dodge Daytona namesake perfectly. Sporting a long, wide, and confident road presence, a 3D Fratzog logo is at the front of a slim and illuminated front grille. The fender flares are more muscular, encasing painted-pocket 21-inch wheels with diamond-cut faces, and the headlights almost disappear under the R-Wing design.

The interior cockpit is getting an upgrade in Dodge vehicles, both the Hornet and Dodge Daytona SRT Concept sporting a best-in-class standard 12.3-inch digital cockpit cluster screen. Inside the Hornet, a standard 10.25-inch Uconnect 5 infotainment system touchscreen adds to the total 22.5 inches of in-vehicle display screen space, practically making the new cockpit as digital as a smartphone with customized settings and profiles. The Dodge Daytona SRT Concept tries to keep closer to the high-performance theme of its namesake with a 16-inch curved instrument cluster, an 8”x3” head-up display (HUD), and a 12.3-inch center screen for the infotainment system. Equipped with a jet-fighter inspired cap that flips up when engaging the start button and a unique pistol-grip shifter, the inside of this concept reminds drivers and passengers this is an all-electric vehicle, with an interior design that mimics a circuit board.

Want to learn more about upcoming Dodge eMuscle models? Follow along with us on NowCar social media.