Today, we bring you some news on the long awaited Chevrolet Corvette ZR1 and the Chevrolet Colorado ZR2, an off-road warrior from Chevy. The former is a little ways away, but thanks to spy photographers and poor choice of where to fuel up, the ZR1 was recently spotted.

Still under wraps, the prototype for the Chevrolet ZR1, or what is considered to be the new ZR1, was spotted at a gas station under the usual camouflage in California. The front and rear bumpers, front fenders, hood, and a huge wing/spoiler atop the trunk are all covered in camouflage, but some bits and pieces have been left uncovered. Mainly, the roof, rear fenders, and doors due to their liking to other Corvettes - in other words, it’s a bit of a tease of what’s to come.

There are some components noticed that set this undercover Corvette apart from others. For instance, the wheel design seen here is not offered on the 2018 Stingray, Grand Sport, or Z06 (at this time). In addition, two large air intakes have been added to the front. There have been rumors of the next ZR1 having a supercharged engine under the hood, and large intakes such as the ones seen below lend way to that possibility becoming a reality. Until its official debut, we can only speculate based on what we know and what we see.

The “Vegas to Reno” off-road race takes place every year and is known to demolish many vehicles before the finish line. With a variety of terrain for vehicles to handle, a few drivers have been hospitalized in previous years, so one can imagine the level of performance it takes to make it through this race alive. It would seem the Chevrolet Colorado ZR2 can manage that just fine.

There were some modifications to aid the driver, limited to only racing body-mandated items, such as a roll cage, a 44-gallon racing fuel tank, racing seats with safety harnesses, KC HiLites racing lights, two-way radios, and a GPS system. Other than that, the Colorado ZR2 was left to its stock components, including a 3.6L V-6 engine and 8-speed automatic transmission, plus a modified version of ZR2’s Multimatic DSSV damper technology. Aside from a couple of hits to the tires and chassis, the Colorado ZR2 made it to the finish line without breaking down amongst another 203 out of the 336 that entered the race. It’s all thanks to the joint efforts of Chevrolet Performance and Hall Racing. 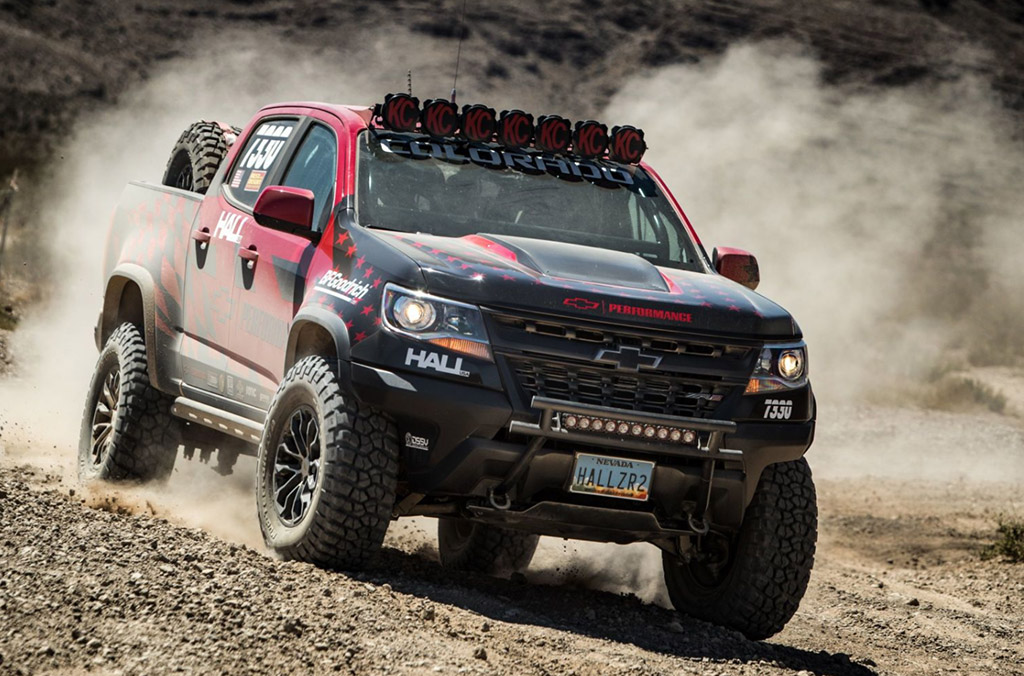 In total, the course took nearly 19 hours to finish, but the drivers, Chad Hall and Frank DeAngelo made it to Carson City, Nevada in one piece. Due to the survival of the ZR2 on this race, there is high speculation that some of these performance parts may actually show up in dealerships for off-road enthusiasts looking to transform their Chevy Colorado. Might be a smart move, given what Hall had to say about the terrain.

“This truck is a lot tougher than I thought it was going to be. I clobbered some things on the course that would’ve broken many of the vehicles we competed with in the past.”

“Clobbered” is a nifty keyword to use when racing off-road. If the Colorado can handle that, then it’s an off-road warrior in our book. Looking for your own? We have plenty of Chevrolet vehicles in store.