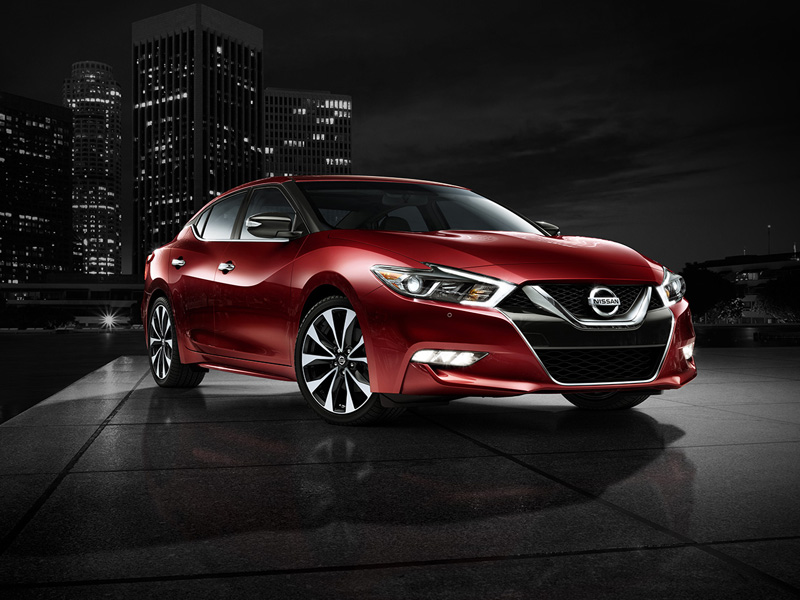 The Upgraded Features in the 2016 Nissan Maxima

The Upgraded Features in the 2016 Nissan Maxima

Before you embark on your new car shopping online, take a minute to read up on the upgraded features in the 2016 Nissan Maxima. All new for the 2016 model year, the Maxima is back and leading the luxury pack for Nissan.

Read on for a glimpse at a few upgraded interior features in the reborn Maxima...

In addition to its edgier looks, the new Maxima is now longer and lower, by 2.2 inches and 1.3 inches, respectively. With its enhanced rigidity and lowered curb weight, the Maxima offers better handling, improved aerodynamics, and boosted fuel efficiency.

Inside though is where drivers will really feel the change from earlier iterations. Luxury is the name of the game, and Nissan backs it up with an abundance of high-end materials and soft-touch surfaces, like available leather and faux-suede upholstery.

Technology is also new with notable details like a rotary-controlled touchscreen, which gives you options on how to use the display and features.

Able to seat five, the 2016 Nissan Maxima comes in five trims, starting with the base S model and moving up to the SV, SL, SR, and high-end Platinum.

Performance testing by Edmunds returned 6.2 seconds from the zero to sixty mph sprint by the SR trim level. Although this time is expected from the sedan class, the SR is considered the sportiest of the new Maximas and comes equipped with Active Ride Control, sport-tuned suspension, active engine braking, which is supported by Active Trace Control.

Other interior tweaks include top of the line leather interior, heated front seats, LED headlights, and 19-inch wheels, which can be wrapped in summer performance tires.

But if luxury is a priority for your online car purchase, consider the Platinum, situated at the top of the trims and loaded with features like leather upholstery, power sunshade, automatic windshield wipers, driver memory settings, complemented by an adjustable power steering wheel, LED headlights, rearview camera and Nissan Connect.

Fuel efficiency is shared among the five trims and measured by the EPA at 22 city, 30 highway, and 25 mpg combined, results that put the new Maxima ahead of its same-segment competition.

Safety is significantly strengthened by standards like traction and stability control, antilock brakes, rearview camera, and front seat side airbags, as well as side curtain airbags. Advancing up the trim level line affords extra safety enhancements like forward collision warning, blind-spot monitoring, rear cross-traffic notifications, and even advanced features like a monitor in the Platinum which is able to detect when the driver is getting drowsy.

If you want to purchase a completely made over car that's to drive and family-appropriate, the new Maxima is worth your consideration. Priced to start at $32,410, the 2016 Nissan Maxima offers affordable excellence from the sedan segment.