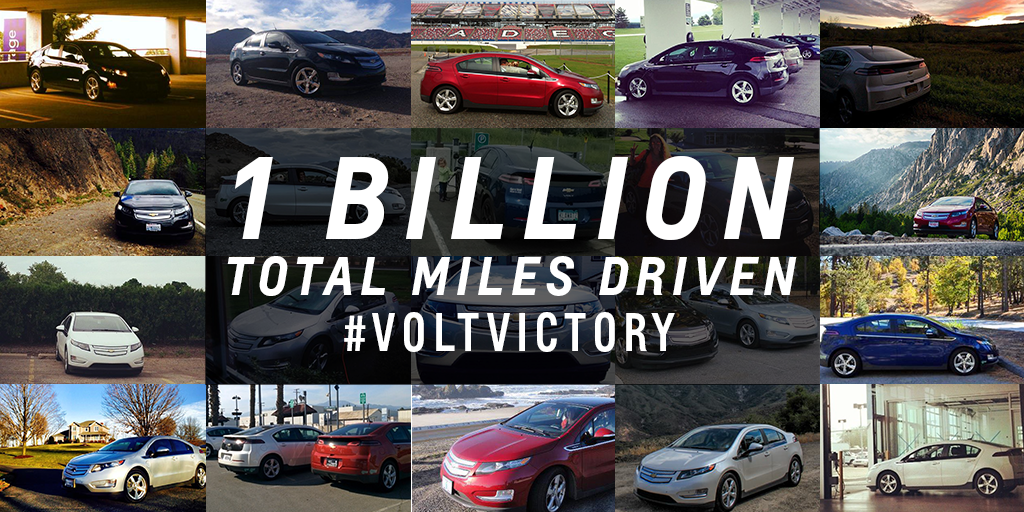 Chevrolet celebrated a major landmark this month when the Volt hit the 1 billion-mile mark. That's a whole lot of miles for a model that was first released in 2011.

Chevy took to social media to announce the exciting milestone, and Volt drivers from all over the country chimed in. One tweet read: "Congrats! Most miles R gas free & free of R [range] anxiety! Ah, freedom!"

Volt drivers are a highly loyal crowd who love their chargeable vehicles and challenge themselves to drive as many all-electric miles as possible.

Most Volt owners find they are able to travel even further than Chevy's estimated range, hitting at least 40 miles before needing a charge.

Based on their data, Chevy believes that the total number of miles driven without gasoline has reached 700 million.

It's an incredibly impressive number when you think about the fuel savings and emission reductions that have stemmed from a single model.

There must have been many collective hours of charging for Volts to have conquered over 700 million miles gas-free.

Also in December, the very first Volt was reported to have reached the 200,000-mile mark. Its owner, Erick Belmer, attests that the battery is still in tip-top shape.

He loves the low-key maintenance routine he's able to follow and calls the Volt his "dream car."

Hopefully the Volt's hard-won battle to prove itself in the car market has paved the way for more vehicles with electric capabilities to see success.

Meanwhile, an updated version of the Volt is slated to debut in January at the North American International Auto Show.

It will continue as a plug-in hybrid but is rumored to have an extended range. It's also going to get a fresh interior look.

One of GM's leading engineers said: "I think in the next car you're going to see everything they love made better---and the things they tell us they'd like us to do differently, we've worked on those as well."

It doesn't seem like you could do much to deter the Volt's faithful groupies. They love going electric, and they're 1 billion miles strong.