Three of the most popular midsize SUVs on the market are the 2016 Honda Pilot LX, Chevrolet Traverse LS and Ford Explorer. To help buyers determine which SUV would be best for their needs, we did a comparison between the most basic trims 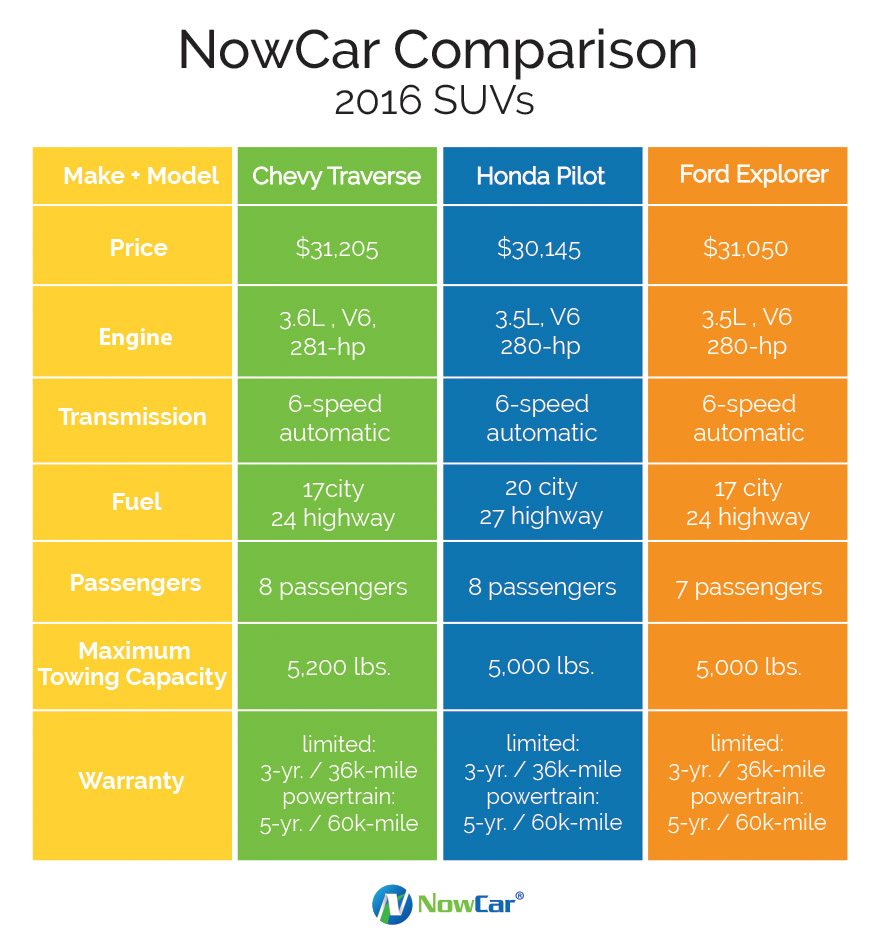 Of all three cars, the Honda Pilot is the most fuel efficient with an estimated fuel economy of 20 MPG city and 27 MPG highway. The Ford Explorer and the Chevy Traverse have the same average fuel consumption with 17 MPG city and 24 MPG highway.

As for some of the basic features, the Pilot LX has a push button start and multi-angle rearview camera with guidelines. With a flat folding third row bench, the Pilot LX can comfortably seat up to eight passengers and is great for storage. The Pilot LX audio system includes seven speakers with speed sensitive volume control. There is one USB audio interface, a MP3 jack and Bluetooth capabilities.

The Chevrolet Traverse LS is known for its refined interior and best in class maximum cargo space. Convenience features include remote keyless entry and has a rear vision camera. Like the Pilot LX,  Like the Pilot, The Traverse LS seats up to eight passengers comfortably. The standard Traverse model also includes reclining front buckets to help maximize space and comes with an acoustic installation package.

The 2016 Ford Explorer has a redesigned exterior and has received some new interior features as well. Unlike the Pilot or Traverse, the Ford Explorer only has seating for seven passengers. The 2016 Explorer model includes updated cloth and leather seating and a front 180-degree camera and front park aid.

Check out our awesome explore pages on the Chevy Traverse LS, Ford Explorer and Honda Pilot LX. Each page has tons of pictures and includes a detailed look into each cars specs.