While most car lovers would prefer a vintage American muscle car, the muscle cars made today are generally stronger, faster and more efficient than those of the past. Of the most iconic cars from the past that are still manufactured today are the Ford Mustang, Chevy Camaro and Dodge Challenger. For those interested in investing in the new 2016 2-door American muscle cars, here are the specs of the most basic trim on the Camaro, Challenger and Mustang. 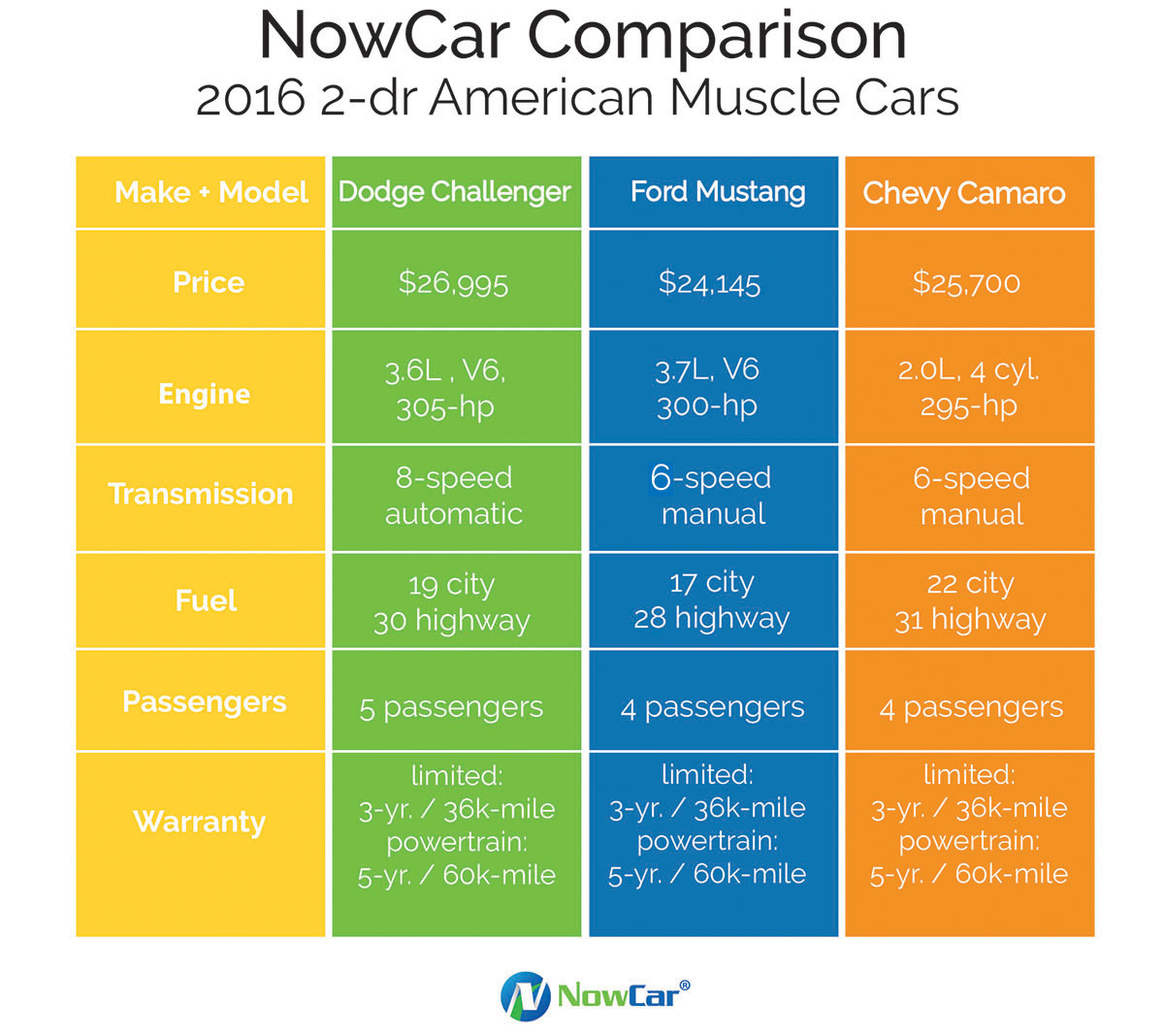 The Dodge Challenger is one of the most sought after American muscle cars on the roads today as it is a part of the Mopar group, an organization made of dedicated car enthusiasts. While the Challenger is available in a variety of trims and engine variations, like the Challenger Hellcat SRT which is  a 707-horsepower HEMI engine, the Challenger SXT is still a powerful and well-equipped two-door coupe. The SXT comes standard with a 5-inch touch screen, six speakers and 18-inch satin aluminum rims. The Challenger is the only vehicle of these three that has seating for up to five passengers.

As Motor Trend’s “Car of the Year,” and J.D. Power’s “Most Dependable Sport Car” for four years in a row, the 2016 Chevy Camaro is a very popular car. The Camaro has three different engine options and each Camaro trim has modern technology features. The most basic Camaro trim, the Camaro 1LT, comes standard with six speakers, a rear vision camera, and 12 months of complimentary XM satellite radio.

Mustangs were one of the first American muscle cars ever made, so they are always one of the vehicles consumers think of when they think of sports cars. The 2016 Ford Mustang is a four-passenger vehicle comes equipped with a rearview camera, 17-inch rims and modern entertainment features. The Ford Mustang also earned a five-star ratings in each of the government’s three various crash tests.

While the Ford Mustang and Chevrolet Camaro are priced below the Dodge Challenger which has a starting price of $26,995, those prices reflect the price of the vehicle with a manual transmission.  Starting at a base price of $24,145, the Ford Mustang is the cheapest vehicle on the list, followed by the Chevy Camaro which is priced at $25,700.

Ford, Chevrolet and Dodge all offer a 3-year or 36,000-mile basic limited warranty and a 5-year or 60,000-mile powertrain warranty on all of their vehicles.