Kia Motors keeps teasing the redesign of its new high-end luxury sedan, the 2019 Kia K900, and it doesn’t seem like they’re going to stop anytime soon. Recently, sketches of the interior were released to the press, and sales of the new model are said to start as early as the second quarter of 2018. That’s a whole four months before most 2019 models start hitting dealerships. So take a look and check out what consumers can expect for the 2019 Kia K900.

At first, all we got to go off of was a sketch of the new K900, the one you can see above. According to Kia Motors following the release of the sketch, the front grille and front fascia would be updated with a new “Quadric pattern” grille, made with 176 jewel-shaped cells, along with ‘Duplex comet’ headlamps … whatever that means. It wasn’t until we got some spy photos of the new 2019 Kia K900 being tested that more came to light.

In January 2018, the 2019 K900 was spotted. Like the new 2019 Kia Forte, Kia Motors has started its own pattern of style with the 2018 Kia Stinger. That swept-back, sharp-lined, aggressive look is going past the Kia Stinger and bleeding into other vehicles. The 2019 Kia K900 is blending the looks of a luxury sedan and a sports car this time around with a more refined front fascia that draws the eyes forward to the pronounced radiator grille and new LED daytime running lights. More details were also found out about the interior, said to be a little roomier for the 2019 model year, another styling cue taken from the Kia Stinger.

This wasn’t all we found out. We also learned of a Lexicon infotainment system, known as the Lexicon®2 Discrete Logic7® Surround Sound System. This encompassed a total of seventeen speakers, an external amplifier, and a subwoofer. The standard setup came with HD Radio, along with SiriusXM Satellite Radio, and available UVO Luxury services. This includes direct access to features like 911 Connect and Enhanced Roadside Assist, and even a free UVO Luxury Services app that lets the consumer connect with their K900 from anywhere for remote start, climate control, and Lock/Unlock. All of this is displayed through a 9.2-inch high-resolution screen display.

With all of this information popping up, we were supposed to see the new 2019 K900 during the 2018 Geneva Motor Show, but seeing as how the show ends in late-March and all of the new automobiles and concepts have already shown up, we’re going to say it’s not likely the K900 is hiding behind any curtains. AutoGuide and CNET.com both say the new 2019 K900 may make its first appearance at the 2018 New York International Auto Show. That’s left up for debate, but we’ll see.

Until the 2018 NYIAS starts up, Kia Motors did tease the internet with more sketches of the second-generation K900 luxury sedan. This time, it’s about the interior - just look at that plush cabin (image below). 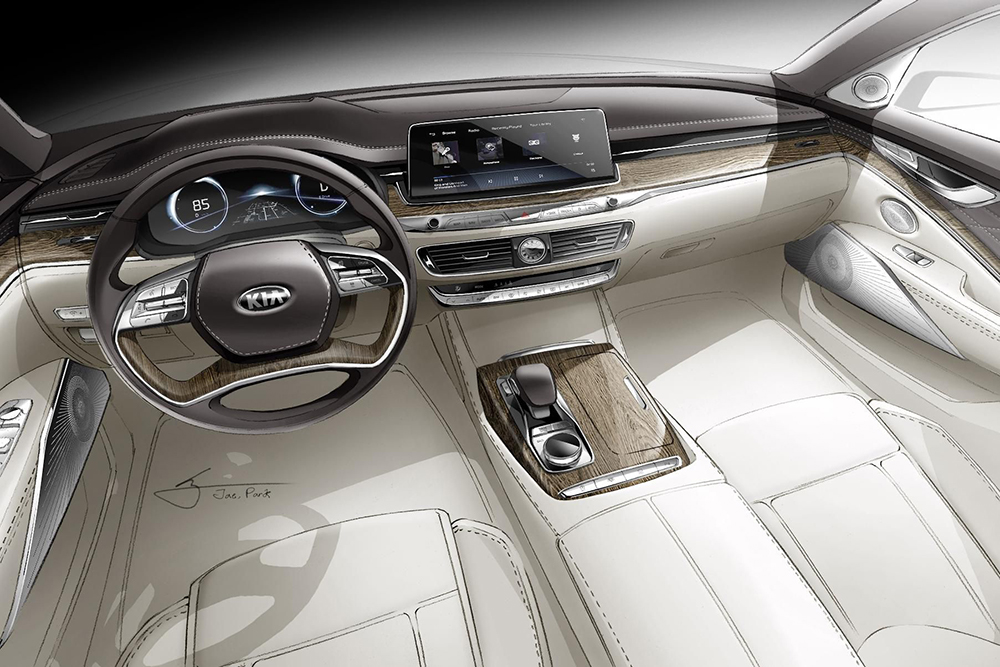 At first glance, it’s a little claustrophobic looking with the wraparound design of the dashboard. The door linens however do have that luxury appeal with quilted stitching, and the redesigned steering wheel mixes leather and wood for thatremium material style. For 2019, the center stack has been minimized in terms of buttons and knobs. The technology for 2019 also has an upgrade - move over, 2019 Ram 1500, there’s an even bigger touchscreen coming to the market. The 2019 K900 has an available 12.3-inch touchscreen infotainment system sitting on the dashboard.

Other new additions popping up are intelligent lighting control with proximity sensors that prompt parts of the center stack to light up when the driver’s hand is nearby, ambient lighting throughout the cabin, and apparently 64 different color choices and 7 color themes. Sixty-four colors sure sounds like a lot, doesn’t it? Kia Motors doesn’t have nearly that many color choices at the moment, so unless there’s some Kia-esque color vault-like Dodge High Impact Paint colors, we’re wondering if we’ll hear some news on that later.

Your best bet is to stay tuned with Miami Lakes Kia social media to learn more about the 2019 K900.