Well, it was only a matter of time. Once hydrogen cell fuel vehicles started popping up, they became an original yet impractical project that has caught some automakers off guard. Where is there a market for futuristic equipment that needs rigorous testing? The army. Say hello to the Chevrolet Colorado ZH2.

We mentioned the fuel cell pickup truck in our last discussion about hydrogen fuel cell vehicles by Kia Motors and Hyundai. We also discussed some of the problems such a vehicle could encounter, such as the dangers of highly combustible fuel and the cost of a fueling station, but also some positives such as the driving range and the easy-to-get alternative fuel source. Recently, the army reported on the findings of its testing with the Chevrolet Colorado ZH2 that General Motors supplied.

The Chevrolet Colorado ZH2 is a splice between GM and the U.S. Army Tank Automotive Research, Development and Engineering Center, or “TARDEC” for short. Having some Iron Man 2 flashbacks with the introduction of SHIELD here. As far as green vehicles go, this truck has by far the coolest name we’ve ever heard for a power/fuel system. The Chevrolet Colorado ZH2 is powered by a 177 horsepower electric motor and a “proton-exchange membrane fuel-cell stack”. Does it come with backpack straps? You bet it does! 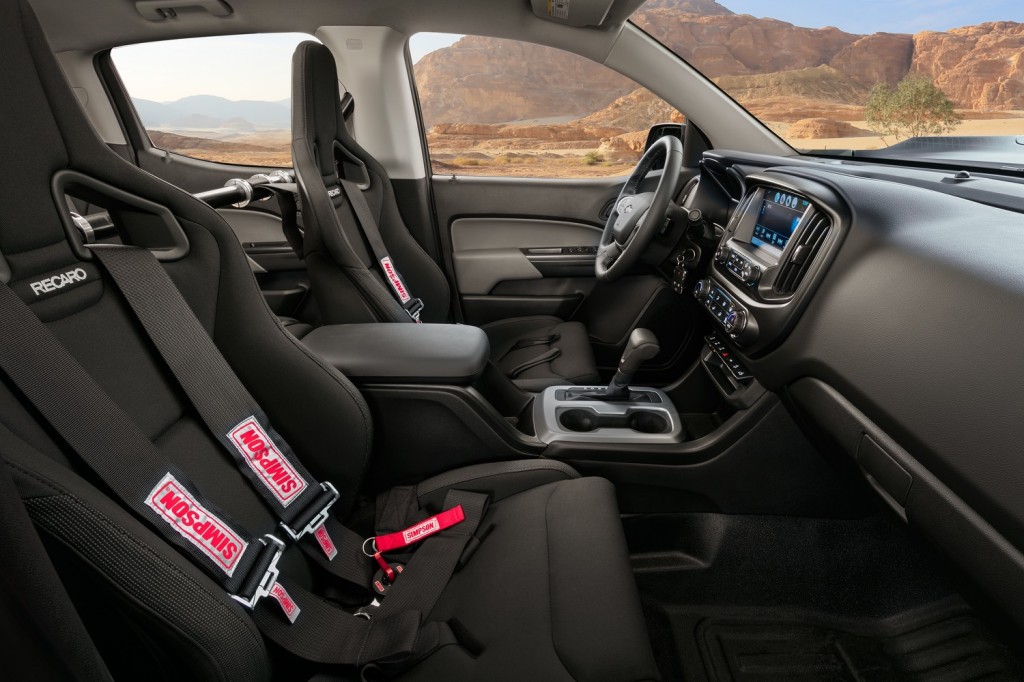 Okay, so more like harness seatbelt straps, and maybe those are the default for army vehicles, but we couldn’t resist the ploy. Although tests are still ongoing at Fort Carson in Colorado, the Chevrolet Colorado ZH2 hydrogen fuel-cell vehicle has illustrated many benefits after strapping on a suspension lift and 37-inch BFGoodrich Mud-Terrain tires for the army modifications. Let’s do a quick run-down.

- Spy or Convoy Missions: The Colorado ZH2 is silent and can sneak up or away from an objective with very little-to-no noise, even in high elevated areas.

- Can Replace Diesel Generators: Diesel generators are currently used by TARDEC to power communications (comms) equipment. The electric generator in the ZH2 can power comms equipment with ease, and a lot more quietly.

- Water Vapor Conversion: Water vapor emissions can be converted into ionized potable water a.k.a. drinking water, which could help for long missions where supplies such as water run low.

There are some drawbacks that will need to be addressed though. If used in the Army, the Colorado ZH2 will most likely undergo gun fire at some point. To keep the highly combustible fuel from being ignited by, oh we don’t know, sniper fire, the Army version of the Chevy Colorado ZH2 is not only outfitted with better protection for the system, but has an emergency protocol program designed to vent hydrogen up and away from the vehicle if its tank's integrity is compromised. Pretty cool.

We also discussed the driving range last time, a solid 150 miles. Like any engine, depending on the stress, that number will shift. Out in the dunes, the range was around 90 miles, but in Colorado, the army saw nearly 200 miles for the ZH2’s driving range. The largest problem being faced is again, the need for an existing infrastructure to store and transport hydrogen as well as act as a fueling station. However, something tells us the army won’t have any trouble finding the funds to make one.

GM plans to go full force with its hydrogen fuel cell vehicles, opening an assembly plant by 2025. By then, a contract with the US Army only needs a signature.