An Inside Look at the Future of Car Technology

An Inside Look at the Future of Car Technology

But, did you know that human error is the cause of 95 percent of automotive accidents?

Nearly every accident or automotive mishap is the result of human miscalculation. That's a lot of accidents, but did you also know that technology is catching up to make human error on the road a thing of the past?

Some of the major automotive manufacturers are investing in amazing new technologies to help  reduce the number of accidents on the road and make driving exponentially safer for everyone.

Thanks to technology, you can already buy a car online. Imagine buying one that can drive itself.

Although it might sound like science fiction, there are some real numbers, studies, and even prototypes to support the very real possibility of these imagined innovations becoming reality.

Consider, for example, the V2V or vehicle-to-vehicle technology, which allows cars to essentially talk to one another.

According to a 2010 study done by the National Highway Transportation Safety Association, Vehicle-to-Vehicle technology could reduce potential crashes by 79 percent.

It works by wirelessly transmitting signals between cars, broadcasting their speeds, directions, and locations.

MIT engineers are trying to create algorithms that will help a vehicle choose an evasive measure, if necessary, in order to avoid a car somehow invading the path on which it is traveling.

Researchers at Ford are also looking into V2I, Vehicle-to-Infrastructure technology, which, when combined with V2V, could reduced automotive accidents by up to 81 percent.

Imagine how much safer the roads would be if this technology  actually reaches the production line?

Now, this really sounds  like a summer sci-fi blockbuster, but self-driving cars might be closer to a realized concept than you think.

In a self-driving car, just as the name sounds, you can just enjoy the ride.

These cars, if manufactured, will drive themselves safely, and arguably, more efficiently than ever before.

How does it work?

Well, self-driving cars record and analyze information they have gleaned about a route using lasers, radars, and cameras. With that information, they are then able to act on and make decisions far faster than a human ever could.

Google engineers have already tested these cars on more than 200,000 miles of roadways. Given the faster processing speeds of self-driving cars compared to humans, it's easy to understand why these cars are safer than current car models.

But, they are also more efficient when it comes to traffic.

Self-driving cars are capable of platooning, which means driving close to each other, almost forming one unit or platoon. This is possible because self-driving cars would communicate with each other and are immune to the distractions plaguing human drivers. 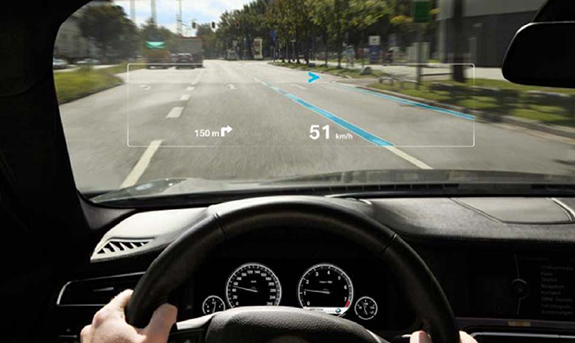 With Augmented Reality technology, the car evaluates its surroundings and makes suggestions to the driver on the best possible response or course of action.

Even cooler, Augmented Reality is being researched for passengers.

Toyota is trying to create a system for passengers to closely examine objects outside of the car by selecting them and zooming in via a touchscreen window, even allowing them to assess the distance between the car and that object.

As cars evolve, they tend to offer more safety features, often in the form of additional airbags.

Airbags are considered a function of passive safety, meaning they work after something has happened. They are reactive. Mercedes wants to make them active, and is working on designs for airbags which will assist the car in active braking.

The idea is that the airbags, situated beneath the car, will prevent a crash from occurring by slowing down the car and enhancing its ability to stop. In this situation, the airbags will also raise the car by eight centimeters, which alleviates the sinking that happens when a car is forced to brake hard.

Since airbag technology already exists, it's not hard to envision these airbags appearing on new cars very soon.

This is excellent news because the batteries powering our current hybrids take up tons of space and significantly add to a car's overall weight.

Even lithium-ion batteries bulk up hybrids.

The panels would allow for downsized batteries and would act similar to batteries by charging through regenerative braking and whenever plugged into a power source.

Basically, the goal is to take hybrid technology and improve upon it so that Exxon Mobil's prediction, that by 2040 half of all new cars will be hybrids, comes true…and maybe even sooner.

Although Toyota looks skyward to harness the sun's energy and create solar power in the body panels of its imagined future vehicles, it has also started looking at other sources of renewable energy.

In a stunning new twist on hydrogen fuel cell technology, Toyota has uncovered a way to harness the hydrogen found in water.

Yes, water. The most abundant element, hydrogen is found everywhere and in practically everything.

Breaking apart water molecules through electrolysis makes it possible to capture the hydrogen in water and use that hydrogen to then power a hybrid vehicle. In this case, the Toyota Mirai, mirai meaning “the future” in Japanese.

Encouraging news all around as automotive technology keeps pace with our evolving world.