Electric Cars Are Taking Over by 2025

Electric Cars Are Taking Over by 2025

As the auto market continues to push forward into an age of alternative fuel vehicles and electric cars, some automakers are fighting the change. Surprisingly, muscle car automaker Dodge isn’t one of those. Having recently stated the Dodge is going electric, Mike Manley, CEO of Fiat Chrysler Automobiles (FCA) stated that a new powertrain lineup and electric variants of fan favorites will start to show up in 2020. Still, combustion vehicles aren’t going anywhere, not for a long time. The race for increasingly eco-friendly combustion vehicles is still hot, even with the ever-growing restrictions, but the focus will shift soon enough to electric vehicles altogether.

"It highlights the importance of making sure ... that we continue to have standards for conventional vehicles that push us towards more efficient, cleaner combustion engines…In the next five years, we're going to sell an awful lot of gasoline and diesel-powered vehicles, and not having those standards in place will lock in a large amount of emissions." - David Reichmuth, a senior engineer at the Union of Concerned Scientists.

Like many others, Reichmuth knows combustion engine vehicles aren’t going to just disappear. Although the transformation of the auto industry is happening at a much faster rate than skeptics would have liked to believe, alternative fuel vehicles are rising in popularity, and just about every automaker is coming out with one. Still, it’ll take a long time for the entire auto market to be made up of eco-friendly vehicles, even with the forecasts of a post-autonomous world quickly coming to fruition.

"The average age of a vehicle on the road today is almost 12 years old in the United States…Even if ... 100 percent of vehicles sold were electric starting today, it would still take 20 to 25 years to replace the entire vehicle fleet with electric vehicles." - Sam Abuelsamid, an auto analyst with Navigant, a research publication that reports on innovations in vehicle electrification, automated driving technologies, and the emergence of shared mobility services. 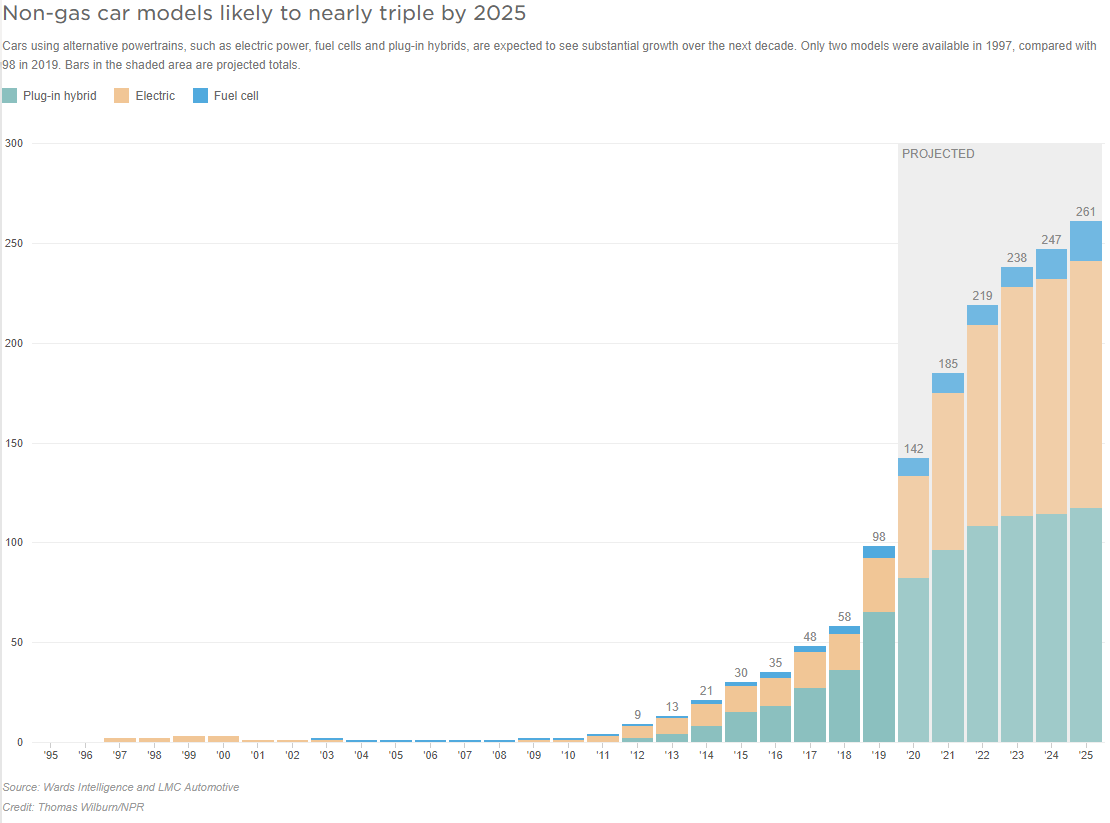 That may be true, but automakers are seeing growth between 50-60 percent in sales on a global level. Wards Intelligence and LMC Automotive, with credit to Thomas Wilburn/NPR, released a chart of the projected growth of plug-in hybrid, electric, and fuel-cell vehicles in the coming years. By 2025, the amount of non-gasoline combustion cars is said to triple, with electric vehicles making up the majority, around 150 million worldwide, with hybrid in second with over 100 million worldwide. It will take a while for fuel-cell vehicles to really break through the bubble, but there’s a projection of at least 50 million for those.

Besides, the knowledge of the benefits electric vehicles offer is becoming common knowledge quickly. The maintenance for an electric vehicle vs an internal combustion vehicle is much cheaper and easier, keeping them charged up is cheaper than buying gas, and they’re far from being boring. Just look at the Kia Soul EV for a funky take on electric vehicles.

“[Plus] they are fun to drive…They're enjoyable, they're quiet ... and there's loads of torque [which means instant acceleration,” - says Tom Murphy, a managing editor at Wards Auto.

The main downside is how much more affordable internal combustion engines are when compared to their alternative fuel counterparts. Luckily, with the price to construct alternative fuel vehicles, hybrids, electric vehicles, etc, is slowly decreasing. Come mid-2020’s, the price to buy an electric vehicle should become comparably cheaper to actually buy and operate than an internal combustion vehicle.