When the GT-R first burst onto the scene in 1969, the Skyline-produced four-door sedan took the driving world by storm. The car became popular for it's performance on the road and on the track, and it quickly took control of the motorsport scene.

The GT-R sport car that we're familiar with today was first introduced in 2007, about five years after Nissan removed the GT-R model from Skyline. Since then, the vehicle has evolved into one of the fastest, most popular, reasonably-priced sports car in the world. So it should be no surprise that the 2016 GT-R will be featured on many a car enthusiast's wish list in the coming months.

If you're looking to buy a car online, the 2016 GT-R may be the way to go, especially considering the vehicle's popularity with enthusiasts and critics. Instead of considering what vehicle to buy, read a handful of reasons explaining why the GT-R is the right car for you…

All Your Favorite Features are Back

You know how the old saying goes: "if it ain't broke, don't fix it." That was clearly Nissan's thinking as they designed the 2016 GT-R. The 2015 edition continued Nissan's dominance atop the midrange sports car market, as the car's popularity was reflected in it's sales. Based on the company's success, Nissan decided to keep rolling with a good thing

The 3.8-liter, V-6 engine is back, with the horsepower (545) and torque (463 lbs-ft) essentially remaining the same. The car is still insanely fast, needing only three seconds to get from 0 to 60 while topping out at 196 mph. Furthermore, the fuel efficiency is identical to last year, as the car is capable of 16 mpg city and 23 mpg highway. While the horsepower and torque numbers are relatively similar to the car's competitors, the GT-R's fuel efficiency sets it apart.

Besides a few alterations to the interior and exterior (including revised front headlamps), the car generally resembles it's predecessor, albeit with some fine-tuning.

Sure, the lack of changes may be underwhelming, but considering the high marks the Nissan GT-R has received over the years, it was the safest move by Nissan to leave it mostly untouched.

It's Got a Stylish Interior 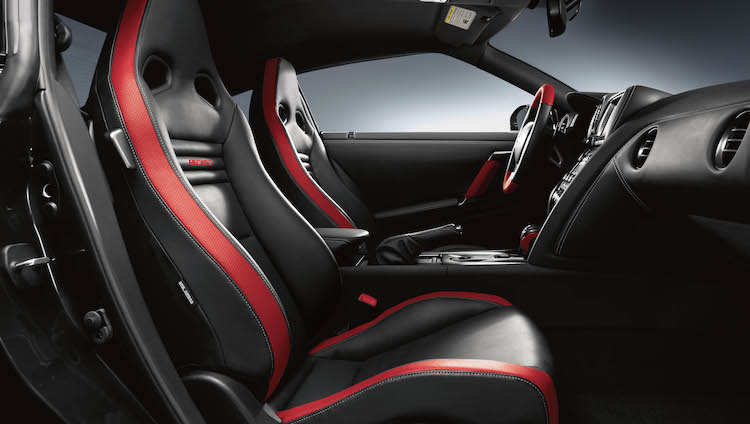 Sure, Nissan may have kept the GT-R's interior mostly the same, but that doesn't mean it's not stylish! Featuring leather seats, an eight-way power-adjustable driver's seat, carbon-fiber and charcoal brushed-metal trim, and the option of five different colors, the vehicle's cabin is still one of the most luxurious on the sport car market.

That's not it for features. The car comes with an 11-speaker Bose audio system, including a pair of subwoofers in the trunk that serve as a giant bass enclosure. There's the Nissan Hard Drive Navigation System, which comes with the NavWeather feature. The GT-R also carries the Nissan Intelligent Key, which allows you to start your engine (as well as lock and unlock your door) with the push of a button.

Finally, in regards to safety, the GT-R has the popular RearView Monitor, making backing up significantly easier. Additionally, there's the Bluetooth Hands-Free Phone System attached to the steering wheel, meaning you'll never have to risk you or your car's safety to answer a phone call.

There are Notable Enhancements in Suspension and Brakes

One thing Nissan did switch up is the car's damper rates for the shock absorbers and ECU settings. This results in better cornering stability, as well as improved precision steering.

Contributing to the car's improved stability is the inclusion of new Dunlop run-flat tires. The improved inner structure leads to better stability at high speeds or on bumpy roads.

There's a Variety of Different Trims

There are several trims a GT-R driver could opt for, including the Premium, Black or Track Editions, although the track edition may never make it to the United States market. Perhaps the most notable option is the 45th Anniversary Gold Edition.

Offering a slightly upgraded horsepower (550), the real change in the Anniversary Edition is the exterior. The car is painted with 'Silica Brass' paint, giving the car a subtle gold shade. Also included are a gold VIN plate in the engine department, as well as a commemorative plate on the center console.

If you're a collector of rare cars, you'll want to put this one on your list. According to Aaron Turpen of TorqueNews.com, only 30 of these cars will be sold in the United States. It will cost you a bit of extra money (in total around $104,000), but compared to the cost of other standard midrange sports car, that's actually not an unreasonable price.

A revised drivetrain management system (as well as newly-designed flywheel housing bearings) will result in a quieter cabin. Noise reduction has been an increasingly popular feature among 2015 cars, so Nissan clearly jumped on the band-wagon. While it may be insignificant to some, this is actually a noteworthy feature for the 2016 models, especially among drivers who plan on using their GT-R daily.

Besides the changes listed above, Nissan also added a new trunk carpet that is supposed to reduce noise in the cabin, and the previously-mentioned revisions to the suspension system and tires will also contribute, all leading to better ride quality.

It's Got a Reasonable Price Tag

The price is where the GT-R truly separates itself from the competition. Nissan's top-of-the-line edition, the NISMO, will cost you about the same among of money as the standard edition of rival cars. For example, the Porsche 911 Turbo comes in at $151,100, while the Audi R8 V10 Plus costs around $173,500… more than a $70,000 difference from the GT-R's standard trim.

Considering all of the car's specs are pretty similar across the board, it's perhaps the most important detail (the cost) that puts the GT-R atop the list of midrange sports cars.

Have we convinced you? As you can see, the GT-R is one of the only sports cars to offer a combination of impressive specs and a fair price tag.

Unfortunately, a release date hasn't been announced, meaning you'll have to wait a bit longer to get your hands on the car. Luckily, we should learn a lot more about the vehicle in the coming months, and these details should only help confirm that the 2016 Nissan GT-R is the car for you!