The 2018 Chicago Auto Show is the place to be in February 2018. Automakers from all over show off new concepts, production models, technology, and accessories. Some are there just to have a little fun and show off projects that most likely will never be produced on a wide scale - we’ll show you what we mean in a bit. For the moment, we’re going to do a quick wrap up of some of the hottest and must-see vehicles and concepts at the 2018 Chicago Auto Show.

The FCA Group nearly dominated the Chicago Auto Show this year, having at least one vehicle from each of their major brands show up. Not only this, but Mopar also came to the show, partnered up with Ram to present an all-new product catalog. If unaware, Mopar is a custom auto shop that has grown and established itself cross-country over the past 80 years. Having a partnership with FCA vehicles, Mopar tends to design and develop auto parts to increase the performance of select brands.

Over the last year, Mopar decided to expand its catalog for the most popular vehicle to customize in the world - the Jeep® Wrangler. Out of all the Wranglers out there, 98% of them have at least one part from Mopar. To better reach Jeep enthusiasts and offer more, Mopar spent a total of 200,000 hours designing, testing, and validating 200 performance parts to enhance the Jeep Wrangler like never before. On top of that, 80,000 of those hours were also dedicated to developing over 300 new parts for the Ram 1500, soon to be available in the next Mopar performance parts catalog.

When shopping for a pickup truck, one wouldn’t really be thinking of customization. Power is the name of the game. Mopar challenged this by designing and developing parts that can customize the Ram 1500 to fit a variety of lifestyles. Being that the 2019 Ram 1500 now comes with an off-road package available for most trims in the lineup, that just gives more reason to turn this once work-focused truck into a truck for fun.

Dodge and Chrysler also showed up, but not really with anything new. The Chrysler Pacifica was there, and it’s still being heralded as the modern minivan for families. The available entertainment packages on the Pacifica, like the Uconnect Theatre, are a testament to that. There was a bulky, somewhat widebody version of the Pacifica on the floor, but we’re not sure the shoe fits that horse.

The 2018 Dodge Challenger SRT Demon also made an appearance, but the real fun was the virtual reality drag racing simulator. Patrons could hop into a reactive Dodge Demon chassis for a realistic experience of what it’s like to drag race the Dodge Challenger SRT Demon. The Dodge Durango SRT also showed up at the Chicago Auto Show, sporting performance parts also designed by Mopar as a part of its catalog. Such parts include a stainless steel exhaust system and a new spring system to lower the ride height by 0.6 inches.

Kia Motors on the other hand did have some new vehicles show up this year. On display was their popular Kia Optima PHEV, a plug-in hybrid with a total driving range of 610 miles. Also making an appearance is the new 2019 Kia Forte, but not just any Forte. Also at the Chicago Auto Show was the special 2019 Forte EX Launch Edition. Like the Kia Niro, the launch edition will be limited in numbers, only to be replaced by another standalone trim that will become a more permanent part of the lineup.

We couldn’t help but notice that the new 2019 Kia Forte also shares some aesthetic cues from the 2018 Kia Stinger. In fact, multiple concepts from Kia Motors are going with the swept-back roof of the Stinger, and we’re starting to think the Kia Stinger is the beginning of a new iconic look for Kia. In addition to the tiger nose grille, body frames may be built to be more aerodynamic and a little sporty. Not a bad thing. At the show, the Kia Stinger appeared with three separate paint jobs - a dark orange-yellow, black, and deep blue. Before the 2018 Chicago Auto Show started, the Concept and Technology Garage allowed members of the automotive press to try out some of the vehicles, the 2018 Kia Stinger being one of them. 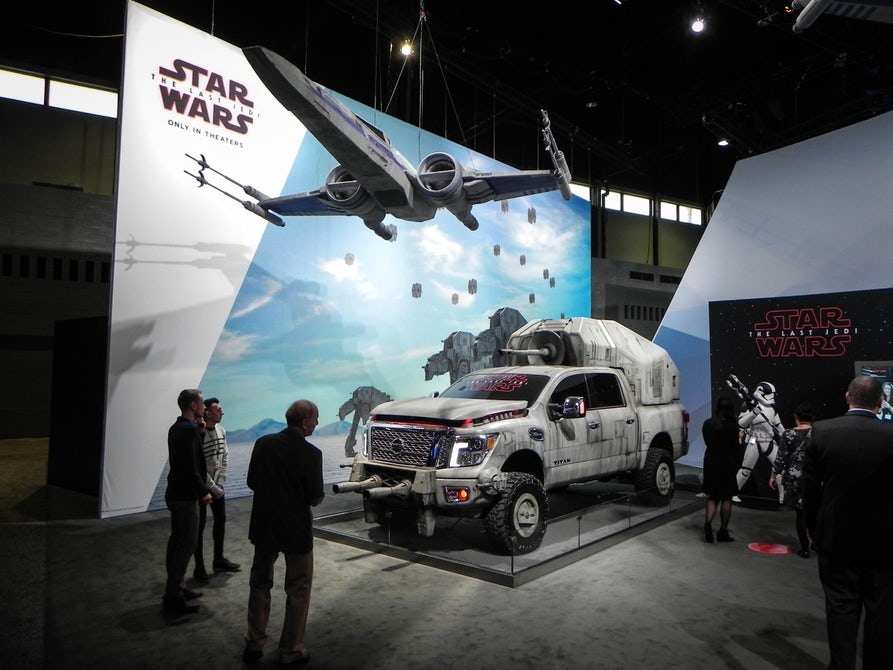 May the Force Be with You

Yep, that’s right. As odd as it may seem, several automakers went with a Star Wars theme for the 2018 Chicago Auto Show. Seen above is like a scene from the movie, with a decked-out Nissan designed to look like an Imperial Walker, based off of the Nissan Titan truck. Connected to this truck was a booth where patrons could dress up as a stormtrooper in virtual reality.

Below are two more projects thanks to the Nissan-Star Wars collaboration. The first is the famous X-Wing with BB8 integrated into the roof, developed from the Nissan Murano SUV. Below that is a Nissan Sentra transformed into a sub-compact Millennium Falcon. We think the spaceship looks way better, even when it was a hunk of junk stranded on the desert planet, Jakku. 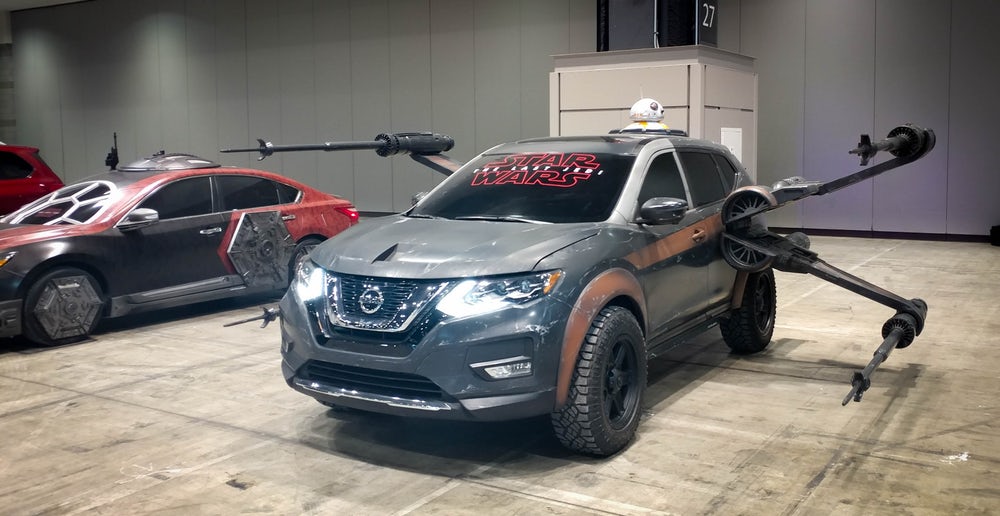 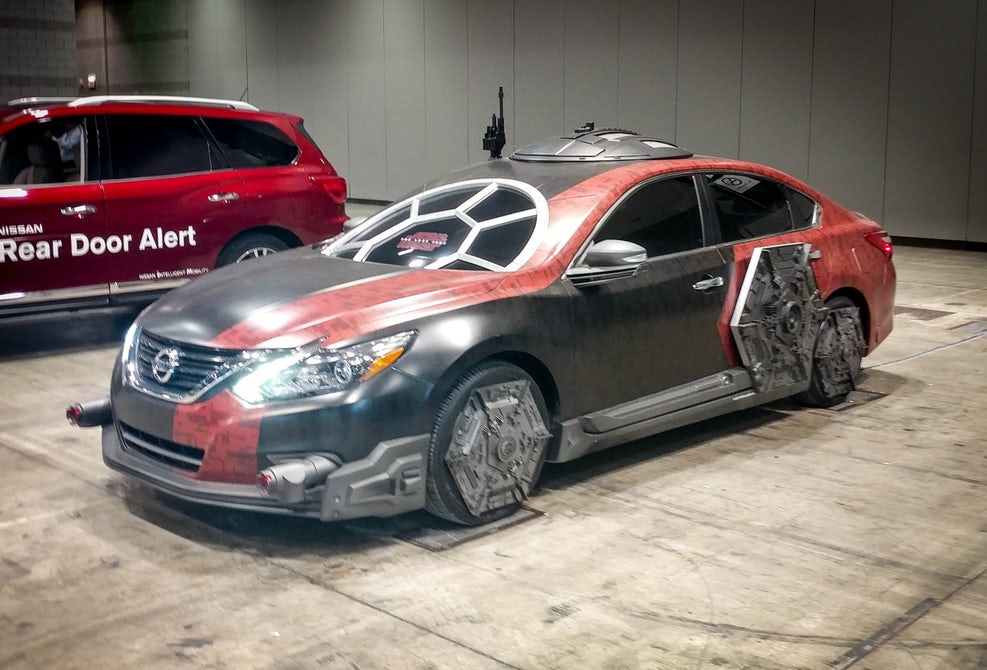 Well there’s old stuff, new stuff, and stuff … out of this world? Heh, it had to be said. Lots of cool stuff showing up and even more will continue as the show goes on. What do you think of what we’ve seen so far? Let us know on NowCar social media.