J.D. Power and Associates concluded the Initial Quality Study (IQS) last month, and the results couldn’t be better, especially for Kia Motors, which had the best ranking for the second year in a row. Although there were auto brands that stood out among the rest, there was an overall improvement for all brands, both domestic and foreign.

Keep in mind that the J.D. Power Initial Quality Study is based on consumer responses, about 80,000 of them. Surveys are sent out and collected from owners and lessees of 2017 model-year vehicles from February to May 2017. From the surveys, J.D. Power associates calculate the average number of problems per 100 vehicles within the first 90 days of ownership. There has yet to be a brand that receives a perfect score of 0/100 problems, but the lower score a brand gets, the better.

Kia Motors’ score was 72 reported problems for every 100 vehicles, which was 11 points better than last year’s score of 83. In addition to Kia’s score improvement, 27 of 33 brands had a better score than the 2016 scores, and the average increase of customer satisfaction with their vehicle increased by 8 percent. Moreover, Ram had one of the biggest year-over-year improvements as their rating decreased by 28 points.

Hyundai’s luxury Genesis brand ranked number two with only 77 problems per 100 vehicles. Porsche, having held first place for three years until usurped by Kia in 2016, comes in at number three with 78 problems every 100 vehicles. The final two spots for the top 5 go to Ford and Ram, both only having 86 problems for every 100 vehicles produced. Some of this was due to an introduction of new technology, but the theme didn’t bode well for many foreign brands.

“For the most part, the industry as a whole has got their arms around this … This is the third-straight year of improvement. It’s an accelerating rate of improvement.”

Toyota, Lexus, Mazda, and the Land Rover, to name a few, had mediocre to poor performance. It came as a surprise to many, because 2017 marks only the third time domestic brands outperformed foreign brands since the first study was conducted in 1987. However, that doesn’t put a blemish on anyone when looking at the industry as a whole.

In addition to the overall brand study, J.D. Power also awards the best performing vehicle in every segment, and five Kia models earned the top award, which was more models than any other brand. The five models that earned top spots are the Kia Cadenza, Kia Forte, Kia Niro, Kia Sorento and Kia Soul.

For more information, check out this table of the top three models per segment. 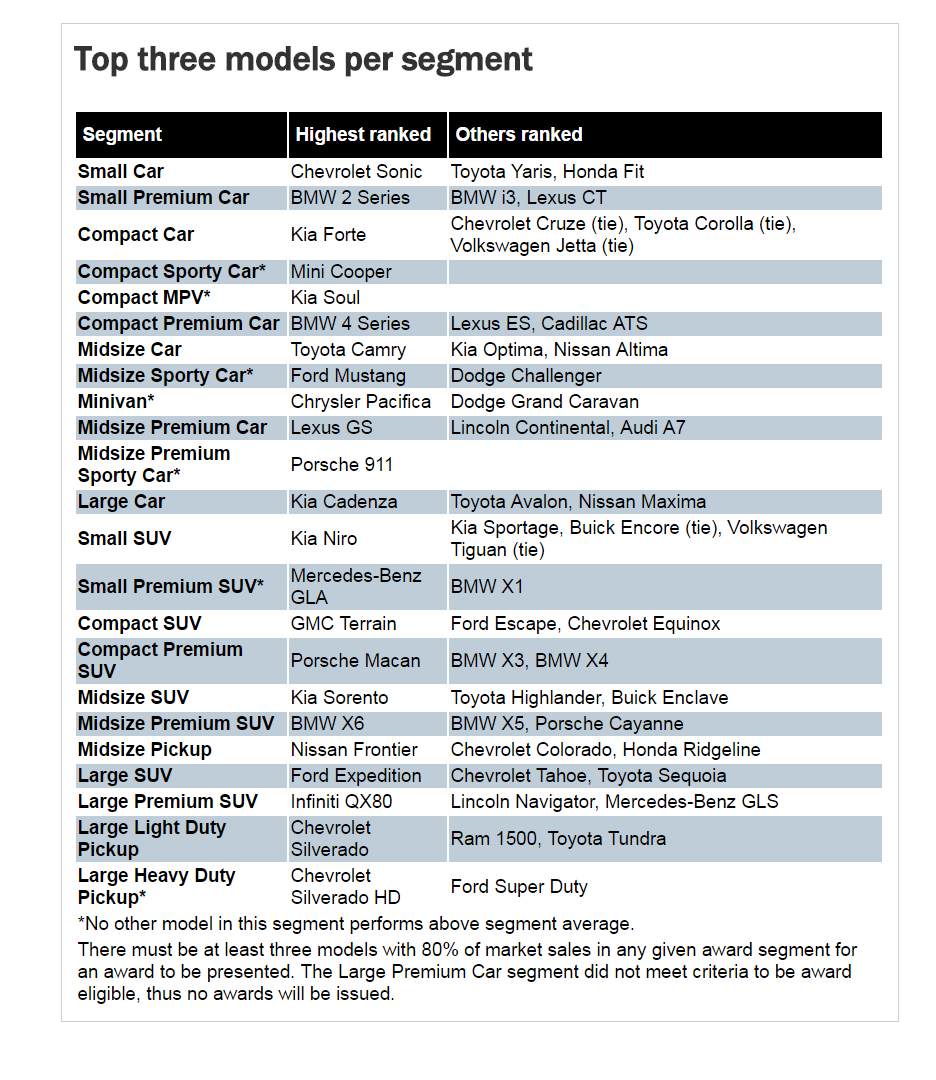 You can find a selection of these Kia Motors models and more with a simple search at NowCar.