The original version of the Mitsubishi Outlander has been around since it was introduced in Japan back in 2001 under the Airtrek nameplate. Two years later, Mitsubishi made the decision to bring the crossover SUV overseas, and with it came the new name: Outlander.

The SUV has been inspiring adventurers across the United States to step out of their comfort zone, and be as free-as-a-bird. The Outlander is Mitsubishi’s best-selling vehicle, and competes with other segment vehicles such as the Honda CR-V, Rav4, and the Ford Escape.

The Outlander has always stood out among the competition, and this year’s extensive exterior redesign sets is even further apart from the other crossover SUVs available in today’s automotive market.

Featuring a bold new sporty-look, the 2016 Mitsubishi Outlander is setting new standards for the brand’s best-selling nameplate. Aside from cosmetic and design changes, the 2016 Outlander gained overall performance improvement, and environmentally-conscious consumers will enjoy the plug-in hybrid version that is set to be released later this year.

When it comes to a crossover SUV that stands out from the crowd, provides adventure around every corner, and is affordable, the 2016 Mitsubishi Outlander delivers.

The 2016 Mitsubishi Outlander is a leader in its segment, offering buyers safety, quality, and value. 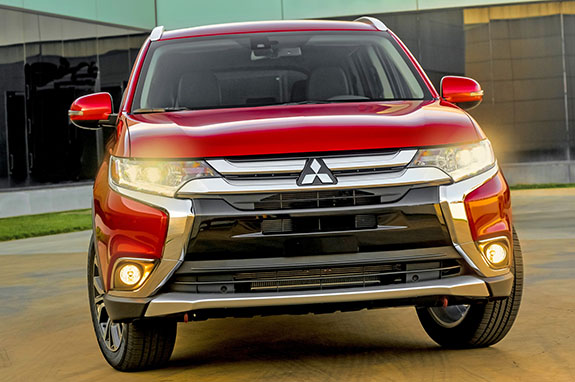 When redesigning the Outlander for the 2016 model year, Mitsubishi made the bold decision to incorporate it’s new design language into a vehicle for the first time.

The 2016 Outlander is the perfect car in Mitsubishi’s lineup to showcase the front design “Dynamic Shield” concept. The new design utilizes chrome on the front end of the Outlander, and gives it a different overall shape. Aside from being aesthetically pleasing, the Dynamic Shield has an important engineering purpose as well.

The Dynamic Shield works to both increase performance and efficiency, as well as provide protection for passengers and the vehicle in the event of a collision.

Other important elements of the Dynamic Shield design include:

The result of the new design is nothing short of eye-catching. Mitsubishi designers worked to ensure that the 2016 Outlander would stand out on the road, and stay ahead of the competition.

One-hundred new design and engineering enhancements were made to the Outlander for the 2016 model year, and the result is a sleek looking, high-powered SUV that exudes refinement.

Improved Performance Across the Board

The 2016 Mitsubishi Outlander may look drastically different on the outside, and have a few new interior features, but the main change on the crossover SUV is under the hood.

The Outlander received a slew of performance changes for 2016, including reduced weight, new transmission, and updated suspension.

While the engine remains the same 2.4-liter four-cylinder unit from its preceding model year, engineers worked to give the Outlander an overall performance improvement, and the results from that effort are nothing short of impressive.

The new generation technology is incorporated into the Outlander, and helps the vehicle gain in areas of performance, acceleration, shift feel, and torque delivery.

Those seeking peace on the noisy highway will appreciate the measures that Mitsubishi took to ensure a quieter cabin for the 2016 Outlander. Thicker rear door glass, increased sound insulation materials throughout the vehicle, and dynamic dampers on the front and rear suspension, all work together to create the quietest Outlander ever built.

Thanks to the use of a more high-quality steel material, the 2016 Outlander say a drastic decrease in overall weight, making for a smoother ride, and more efficient vehicle.

Mitsubishi also went above and beyond to give the interior of the 2016 Outlander an updated, more premium feel, including the following standard features:

Drivers that are looking for the most fuel-efficient Outlander option, can look no further. The Japanese automaker will soon be releasing a plug-in hybrid version of the 2016 Outlander, that will surely impress even the most environmentally-conscious driver.

The 2016 Outlander Hybrid, known as the Outlander PHEV, will be hitting showrooms in the United States by the end of this year, and will offer the best of both the gasoline and electric vehicle world.

Currently, Mitsubishi sells a hybrid Outlander overseas, but will release a completely new version for the U.S. market. The Outlander PHEV will feature the standard 2.0-liter four-cylinder gasoline engine, along with two electric motors and 12kWh lithium-ion batteries.

The 2016 Mitsubishi Outlander PHEV can be expected to hit dealer showrooms across the United States by April of 2016.