The Mazda MX-5 Miata was released into the North American automotive market in 1989, first debuting at the Chicago Auto Show of that same year.

The small, lightweight, and sporty roadster features seating for two, a front-engine, and rear wheel drive. The success of the MX-5 has been impressive over the years, and it has continued to be the best-selling two-seat convertible sports car in history. By July of 2014, over 940,000 MX-5s has been manufactured and sold across the globe.

The 2016 Mazda MX-5 Miata is an all new version, and is the first installment in the roadster’s fourth generation. A lot has changed from the outgoing model year to this one, including a revised interior, new body style, updated exterior appearance, and an all-new engine.

Drivers interested in the 2016 Mazda MX-5 can choose between four trim levels, starting at just $25,735. Aside from its affordable starting MSRP, the 2016 MX-5 has a lot of other good things going for it - all which help beat out competitors like the 2016 Subaru BRZ. 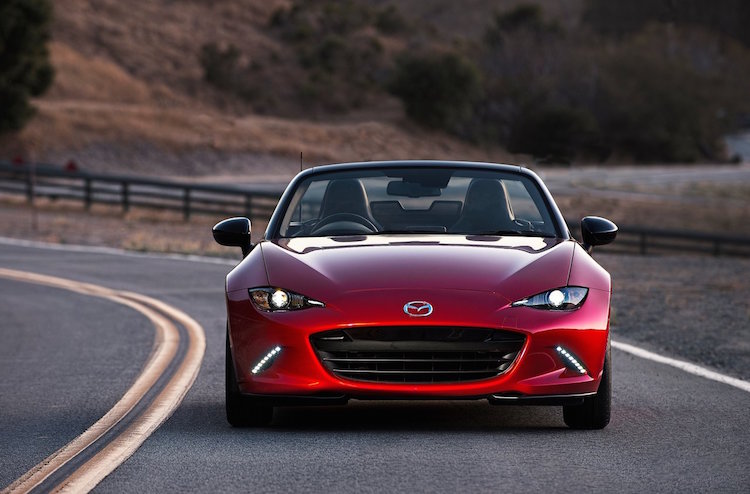 After the third generation was announced back in 2008, it has been eight years since the MX-5 has seen any major changes. The newest installment of the Mazda MX-5 Miata is not only fun to drive, it’s also more comfortable and sleek looking than ever before. See the different ways in which the 2016 MX-5 has changed for the 2016 model year.

The friendly “smiley face” front end of the MX-5 is a thing of the past. Replacing it, is a front bumper inspired by the Japanese automaker’s signature Kodo design. The MX-5 features a wider stance than past models, and also sits much lower to the ground, thanks to the lower-mounted engine. The 2016 MX-5 also differentiates itself from the 2015 version with a curvier hood, and angled door panels. The rear fender displays redesigned taillights with full LED features.

The all-new 2016 Mazda MX-5 Miata truly brings the roadster back to its roots. Featuring a more driver-focused experience, the newest MX-5 iteration is sure to satisfy any roadster fan. A brand new chassis is fourteen percent lighter than previous models, with a total curb weight of well under 3,000 pounds. Most notably, the 2016 MX-5 is now paired with Mazda’s signature Skyactiv drivetrain, for a better balance of power and efficiency.

The 2016 Mazda MX-5 Miata features four trim levels: the base Miata Sport, the Miata Club, the Miata Grand Touring, and the Miata Launch Edition. Each comes with its own unique configuration of standard features, as well as differing starting MSRPs. Check out some of the details for each of the four trim levels below:

Starting at just $25,735, this base model has more standard features than the outgoing model. A few of the standard features that were not previously offered on the base MX-5 include: LED headlights, LED tail lights, 16-inch alloy wheels, cruise control, leather-wrapped shift knob, integrated Bluetooth wireless technology, leather-wrapped steering wheel, power door locks, and a USB input.

With a starting MSRP of just $29,420, the second level up on the trim level ladder offers drivers the ultimate track-ready roadster. The Club level features include a unique group of options for improved handling and performance. Check out a sampling of what this model of the MX-5 will have included as standard equipment:

Both the MX-5 and BRZ are cars that are fun to drive, offering top performance and sporty handling. Both cars have similar starting MSRPs, just under $30,000 - so where do the two differentiate from one another?

For those who are serious about speed, and achieving it as quickly as possible, they will be happy with the MX-5, being about a half second quicker on the track than the 2016 BRZ. For added performance, the 2016 Mazda MX-5 Miata comes with Brembo brakes, which the BRZ does not offer. With the Brembo brakes, the MX-5 stopped five feet shorter than the BRZ, and important consideration when purchasing a performance roadster.

Under extreme track conditions, the 2016 MX-5 Miata handles better than the BRZ, with a slicker and quicker shifter than what is offered on the 2016 Subaru BRZ. A major difference between the two cars is space, with the BRZ offering a backseat where the MX-5 leaves it out.

Those who are truly seeking a high performing car, used mainly for a “toy,” will be happier with the added speed and weight reduction on the 2016 Mazda Miata MX-5.