The Chevrolet Volt is General Motors’ plug-in hybrid solution for rising gas prices, and increased concerns over the state of our environmental health.

The car of the future began selling in December of 2010, and has sold over 75,000 units in the United States alone. The need for a vehicle that offers drivers the flexibility and choice over how their car is fueled, is apparent.

Not only was the Chevrolet Volt one of the first mass-produced electric-gas plug-in hybrids, it was also one of the first plug-in electric vehicles made available to the public at an affordable price point.

The first five years that the Volt was produced comprised the first generation of the vehicle. For the 2016 model year, Chevrolet went all-out to launch an impressive second-generation Volt that has more than enough updates and stylistic changes.

This complete redesign has resulted in a Volt that delivers more power, and more efficiency than ever before. With all those updates and increased appeal, it is surprising that the 2016 Volt costs less than previous model years.

The 2016 Chevrolet Volt is a welcome update on a well-loved vehicle that is saving Americans thousands of dollars at the pump each year.

The 2016 Chevrolet Volt got quite the makeover for its 2016 model year, debuting the second-generation of the vehicle in pure exterior style and class. The interior, exterior, and basic platform were all updated for 2016, making it a leaner and more efficient vehicle overall.

The new chassis that the 2016 Chevrolet Volt sits on reduces the weight and improves the overall packaging of the hybrid car.  The exterior of the 2016 Volt features a new sculpted design, and vehicle architecture that helps give the Volt an even longer battery-only range.

The pointier, more rounded nose on the front of the Volt, gives it a modern look that distinguishes itself from other, more conventional cars. The exterior of the Volt isn’t the only change that is taking place for 2016.

The interior was also revamped with extra legroom, new controls and dials in lieu of the outdated touchscreen, and space for a fifth occupant, where previous model years could only accommodate four. 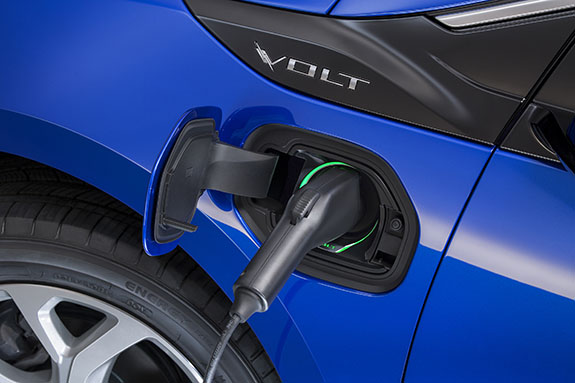 Previous Volt models were able to reach a battery-only range of 38 miles, while the all-new 2016 Chevrolet Volt can reach up to 50 miles on the electric battery before utilizing the gasoline reserve.

The jump in numbers means that Volt drivers will be able to make an estimated 90-percent of their trips without using even an ounce of gasoline. The 2016 Volt has a total estimated range for batteries and a tank of gas of 420 miles. The highway fuel economy is bumped up to 41 miles per gallon in the extended range mode, while the all-electric mode range rises to 102 MPGe.

The new battery technology works to allow the Volt to store more energy in a more efficient way. The pack utilized in the 2016 Volt is an impressive thirty-pounds lighter than the one used in previous model years, and has an increase in storage capacity by twenty-percent.

The cells in the battery pack are also positioned differently than previously, allowing for an improvement in the car’s overall driving dynamics. Engineers behind the 2016 Volt designed a new “Regen on Demand” feature that will allow drivers to utilize regenerative braking in the compact car, by simply adjusting a paddle behind the steering wheel. With the regenerative braking in action, drivers can recycle energy every time a foot is lifted off of the accelerator.

The battery-charging platform also received new GPS location-based technology for 2016. The system can communicate to the Volt so it knows when it reaches home, and will only charge in lower off-peak hours, when utility costs are at their lowest.

The improved fuel economy and performance are both thanks to the all-new powertrain for the 2016 Chevrolet Volt. The 1.5-liter four-cylinder engine replaces the 1.4-liter engine previously used in the outgoing model. The added power and performance do not hinder efficiency, but instead it is improved upon with a new battery design and chassis.

The new Voltec engine saves drivers money when they do have to fill up, by running on regular unleaded gasoline, as opposed to the premium fuel the 2015 Volt required. The 2016 Volt dropped 100 additional pounds with its new drive unit that is also between 5-12 percent more efficient.

Not only does this new unit decrease overall weight for added efficiency, it also has proven to provide a decrease in noise and vibration, giving the 2016 Volt a more refined feel, and smoother ride.

Drivers and passengers alike will appreciate all of the added effort that has gone into the 2016 Chevrolet Volt to make it just as comfortable as it is economical.

With all of the impressive updates, it is surprising to learn that the 2016 Chevrolet Volt has a starting MSRP that is less than the outgoing model.

The 2016 Chevrolet Volt will cost drivers about $1,200 cheaper than previous model years, with a starting price of only $33,995. That price does not factor in government tax incentives, which can potentially shave off another $7,500. T

With the lowered cost of the initial 2016 Chevrolet Volt, as well as tax incentives factored in, the hybrid gas-electric compact car is easily accessible on nearly any budget. The savings continue for years down the road, with drivers estimated being able to drive 1,000 miles between fill ups.

Everything about the 2016 Chevrolet Volt is new, exciting, and purpose-driven. Every bit of energy that went into designing and revamping the Volt, was done to optimize both efficiency, and the overall driving experience.