The Japanese automaker introduced a brand new full-size pickup truck called the Toyota Tundra in May 1999. Since then, the Tundra has been nominated for the North American Truck of the Year by Motor Trend Magazine multiple times, and continues to offer a high-performance ride for commuters and adventure-seekers alike.

The Toyota Tundra is still in its second generation, and with its refresh for the 2014 model year, this year’s pickup truck did not receive any major changes. The Toyota Tundra did, however, gain a new high-performing off-road model to its lineup called the TRD Pro.

The interior of the Toyota Tundra has more unique storage options than ever before, making it easy to keep the cabin organized for long road trips, and the short commute to work. The latest model is surprising the automotive world, even beating out tough competitors like the 2015 Ford F-150.

The 2015 Toyota Tundra is the full-size pickup truck that should be on every driver’s must-have list.

For 2015, Toyota unleashed it’s newest edition of the Tundra: the Tundra TRD Pro. This off-road performance machine packs more than a punch with its dual exhaust, and has a fully loaded interior that puts all other pickup trucks to shame. Check out all that the off-road powerhouse comes standard with, including the impressive engine and powertrain.

Power & Performance: The 2015 Tundra TRD Pro comes standard with a powerful 5.7-liter V8 engine, that stands out in the crowd with its tuned dual exhaust. The TRD-tuned suspension, tuned front springs, and remote-reservoir TRD Pro Bilstein front and rear shocks, all work together to create an incredible off-road experience. Ready to tame even the toughest trails, the Tundra TRD Pro is simply unparalleled in today’s automotive market.

Exterior: The outside appearance of the TRD Pro is as practical as it is intimidating. Featuring headlights with black sport bezels, a ¼-inch aluminum skid plate, and a TRD Pro stamped truck bed, are all proof that the Tundra TRD Pro is not messing around. Check out what else the exterior comes standard with below:

Interior: The interior of the TRD Pro commands as much attention as the interior of the performance-driven pickup. The unique TRD Pro accents include, exclusive TRD Pro fabric-trimmed seats with embroidered badges, and TRD accented floor mats, ensure that the Tundra TRD Pro is a true stand out. Check out other standard features below:

To put it simply, the 2015 Tundra TRD Pro demands respect, both on and off the road. Drivers who seek practicality by day, and off-road fun by night, will appreciate every aspect that the engineers worked into the TRD Pro design.

In the world of full-size pickup trucks, certain nameplates stick out as being superior than others. The Toyota Tundra has always been a superb pickup truck, but has flown under the radar for years. That is all changing, with the 2015 model year. The power, space, price, and performance, all beat out tough competitors like the 2015 Ford F-150. Check out the top three reasons why the Tundra is far superior than the F-150. 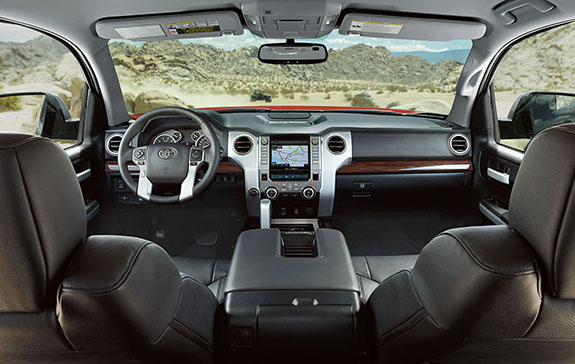 Each one of the unique storage features on the 2015 Toyota Tundra help ensure drivers that there is plenty of room for whatever life throws their way.