The Sienna replaced the Previa minivan from Toyota’s lineup in 1997, and offered drivers front wheel drive, built on the platform of the Camry. Smaller in size than other minivans at the time, the Sienna stood out from the very start. In 2003, the popular minivan received a complete redesign, making it just as spacious as competitor vehicles, and is currently the only minivan on the market to offer an all-wheel-drive option.

For 2015, Toyota introduced a decent list of updates to the interior, exterior, and an updated body structure. Most notably, the 2015 Sienna has earned a long list of awards for this model year, making it one of the most awarded minivans available in today’s market.

Compared to tough competitors, the 2015 Toyota Sienna is a worthy opponent, beating out top minivan names in important categories like price, and interior volume.

All Around Updates for 2015 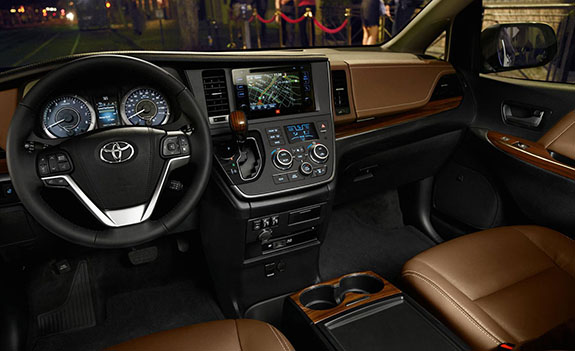 Dubbed the “Original Swagger Wagon,” the 2015 Sienna is living up to its name. With impressive new features, exterior detailing, and new safety updates, the Toyota Sienna is a force to be reckoned with. Check out a few of the changes drivers will enjoy on the facelifted 2015 Toyota Sienna.

Exterior Updates: The exterior of the Sienna received minor restyling changes which include:

Interior Changes: The 2015 Sienna is no stranger to convenient and luxury amenities. Many changes for this model year include:

Safety Updates: Safety technology is ever-changing, and Toyota is keeping the Sienna up to date on important safety features.

The Toyota Sienna has been receiving awards since it first hit the American market back in 1997. It should come as no surprise that the 2015 version of the well-loved minivan, is receiving new attention from numerous institutions.

The 2015 Toyota Sienna is the ultimate family vehicle, that offers protection, as well as amenities to keep your family happy, comfortable, and occupied on the go. The Sienna has earned multiple awards for 2015, including:

It is safe to say, that Toyota got it right when they designed the 2015 Sienna minivan. A safe choice for families, the Sienna will not only deliver you where you need to go in comfort and convenience, but it will also do so safely.

Stays Ahead of the Competition

The 2015 Toyota Sienna has a lot of great things going for it. Still the only minivan available in North America with an option for All-Wheel-Drive, the Sienna can conquer varying weather conditions with ease. No other minivan can make that same claim.

Aside from AWD, the 2015 Sienna offers a great value above tough competitors in its segment like the Honda Odyssey, and the Town & Country Touring. The 2015 Toyota Sienna starts at just $35,785, while the Odyssey starts well above with an MSRP of $36,655, and the Town & Country Touring begins at $36,310. Aside from initial cost, the Sienna comes out ahead in other important areas as well.

Interior Space: The 2015 Sienna has a lot of room for passengers, as well as their cargo. The following measurements include areas where the Sienna outdoes both the Honda Odyssey, and the Town & Country Touring:

When it comes to making room for taller passengers, the Toyota Sienna is the only minivan that makes those accommodations.

Safety: An important factor consider in a vehicle whose main job is to transport families from place to place, the Toyota Sienna delivers important safety features, and recognition that the others do not. Complete with standard front knee airbags, front fog lights, third row manual headrests, and an NHTSA front crash test rating of 5, the Sienna will keep your family safe.

The 2015 Toyota Sienna is a clear choice for families who want convenience, safety, and style. With an overhaul in design elements for the 2015 model year, the Sienna is as confident on the road as ever before. No other minivan on the road can compare to the features and amenities that the Sienna offers standard.