Toyota introduced its full-size SUV, the Sequoia in 2000. The large sport utility vehicle has been manufactured right here in the United States of America, in the Toyota Motor Manufacturing Indiana plant in Princeton, Indiana, ever since. The Sequoia sits between Toyota’s mid-size 4Runner, and it’s premium Land Cruiser, as the brand’s luxury full-size SUV. The 2015 Toyota Sequoia is part of the SUV’s second generation, and received no major changes for this new model year.

The 2015 Toyota Sequoia is the perfect family vehicle, featuring a lot of extra space for passengers, as well as cargo. With three different trim levels to chose from, the Platinum offers drivers the most luxury amenities, for the best value. The Toyota Sequoia was built to perform, and outperform its competition. The 2015 Sequoia outdoes the Chevrolet Tahoe in all major areas, offering a better value, with more standard features.

Enough Space to Go Around 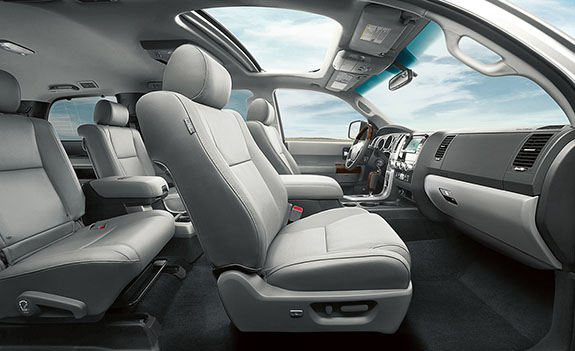 When designing the 2015 Sequoia, Toyota went to extremes to ensure that the full-size SUV would offer the most amount of space for passengers, cargo, and everything in between. The Sequoia has many excellent added amenities to make for a great ride, but it is within the cabin space that the Sequoia truly shines. There are six main reasons why the 2015 Sequoia offers drivers the most flexibility when it comes to interior space.

Featuring a dual glove compartment, a multi-functional second row center console complete with extra cup holders, and additional storage space, the Sequoia ensures that no matter where you sit in the cabin, convenient storage will be close by.

Round up the whole family, friends, and loved ones. The Sequoia has enough room for all. The high-end Platinum model also has the option of second-row captain’s chairs, for those who only need seating for seven.

The interior cargo capacity reaches an impressive 120.1 cubic feet, when all of the seats are folded flat. The optional power liftgate makes accessing your cargo space easier than ever, with the simple push of a button.

With the push of one button, the third row on the Platinum and Limited models, can either recline, or fold-flat. Whether your passengers want to kick back and relax, or you need extra cargo space - the Sequoia delivers.

Go Big with the 2015 Sequoia Platinum

Exterior: The exterior of the Platinum model stands out from the SR5 and Limited models, with very important distinctions.

Interior: As with the exterior of the Platinum model, the interior has significant differences to the other Sequoia models. They include:

Safety: One of the main categories that sets the Platinum apart from other models, is the category of safety. Featuring advanced safety technology not available in other trims, the Platinum is the best bet for safe travels on the road ahead.

The 2015 Sequoia Platinum model delivers a lot more standard features, that both drivers and passengers are sure to appreciate. 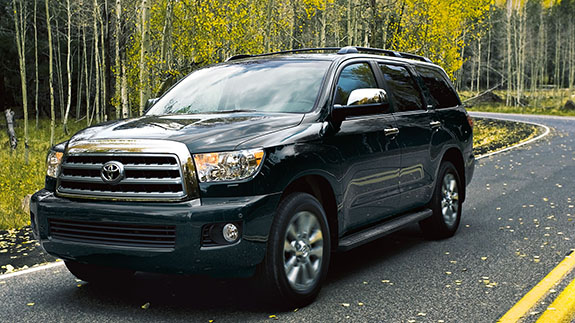 The following compares the 2015 Toyota Sequoia with the 2015 Chevrolet Tahoe, as the base models equipped with four-wheel-drive.