The Toyota Highlander is a midsize crossover SUV that was introduced to the North American automotive market in 2001. The Highlander was built on the platform of the Toyota Camry, giving it a car-like feel, with the capabilities of a sport utility vehicle.

It has been a popular nameplate in Toyota’s lineup since it was first introduced, and the SUV continues to impress with multiple awards and recognition. The Toyota Highlander offers seating for up to eight passengers, and features a third row of seating to accommodate its full capacity.

The 2015 Toyota Highlander was named one of the 15 Best Family Cars by Kelley Blue Book, giving the SUV a clear advantage in the family-vehicle segment. Drivers who seek to save money at the pump can opt for the high-end Toyota Highlander Hybrid Limited, featuring Toyota’s advanced hybrid technology.

Both the gas option, as well as the hybrid option of the Highlander, feature some of the most advanced safety features, making it one of the safest vehicles on the road today. 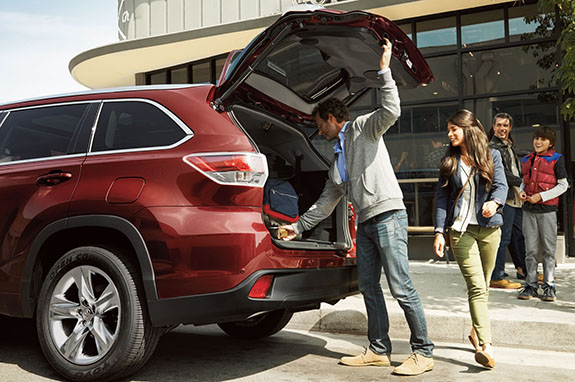 Kelley Blue Book recognized that the 2015 Toyota Highlander was a great choice for families from the very start. The three-row crossover SUV caught the attention of the publication with it’s unique offering of standard features, convenient size, and interior comfort.

Check out some of the small reasons why KBB thinks that the 2015 Toyota Highlander is the best family SUV on the road today:

The 2015 Highlander has won many other awards, as it continues to impress both critics and buyers alike. Check out a small sampling of other accolades earned by the SUV for 2015:

Recognized for Safety that Goes Above and Beyond

The 2015 Toyota Highlander earned two of the most prestigious and sought-after safety awards around. The Insurance Institute for Highway Safety named the 2015 Highlander a Top Safety Pick+ with optional front crash prevention technology.

Check out some of the elements incorporated into the Highlander that helped it earn its high safety ratings:

The 2015 Highlander Limited goes a step beyond standard safety, offering drivers the option to add the Platinum Package, which features the following advanced safety technology:

The most efficient Highlander model also happens to be the most luxurious in the lineup. Featuring a 3.5-liter V6 engine with an electric motor, the Highlander Hybrid boasts an impressive 280 horsepower, and 28 miles per gallon on the highway. The interior has enough room for seven passengers, and comes standard with plenty of luxurious amenities, for a starting MSRP of $47,750.

Check out some of the interior amenities below:

The 2015 Toyota Highlander Hybrid is a great choice for families who seek to stay ahead of the technological curve, save money at the pump, and take advantage of Toyota’s high-end trim level - all for one great price.