The Toyota Corolla first rolled off the assembly line back in 1966, and has been a popular choice for American car drivers ever since. In 1974, the Toyota Corolla was the best-selling car in the world, and the popularity of the compact car has only increased since. In 1997, the Corolla was the best-selling nameplate in the world, surpassing the ever-popular Volkswagen Beetle.

Having undergone several redesigns, the 2015 Toyota Corolla is currently enjoying its impressive eleventh generation. After having undergone major design changes for the 2014 model year, the 2015 Corolla did not receive any major updates. Matching its eleventh generation, the 2015 Toyota Corolla sedan comes in a staggering eleven trim level options, providing drivers with more individual selections than any other sedan in its class.

In a highly populated segment, the 2015 Toyota Corolla truly stands out. Beating out the competition, including the 2015 Ford Focus, the Corolla is as practical as it is popular. The sporty performance inspires a sporty interior design, and unique performance elements. The Toyota Corolla is no stranger to a good old “pat on the back,” and with plenty to be proud of, the 2015 Corolla has a long list of awards and accolades to its name.

Drivers and critics alike agree that the 2015 Toyota Corolla is just as strong as it was when it was the best-selling nameplate in the world back in 1997.

The 2015 Toyota Corolla was built for practicality, performance, and comfort. The compact sedan delivers on all accounts, and leaves even the toughest competitors behind. The Ford Focus, Chevy Cruze, and Volkswagen Jetta cannot keep up with the ever-popular Corolla, and each model falls behind in various categories that the Corolla excels in.

Price - The 2015 Toyota Corolla starts out with an MSRP of only $17,775. Not only is this price affordable, it also stands out amongst the competition.

Fuel Economy - The 2015 Toyota Corolla gets an impressive EPA-estimated fuel economy of 37 miles per gallon. Other vehicles in its segment are unable to keep up with Corolla’s efficiency, leaving them less time on the road, and more time stuck at the pump filling up.

Space - Finding enough room in a compact sedan can be tough. The 2015 Corolla ensures that drivers and passengers have sufficient room to stretch out, relax, and enjoy a comfort-filled riding experience. The competition? Not so much.

It is clear that the 2015 Toyota Corolla stands apart from the rest in its crowded segment. Making the most of every aspect, Toyota engineers designed the Corolla to perform, and outperform the competition. 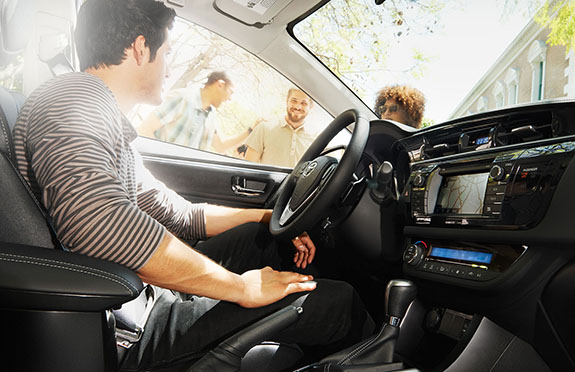 Everything about the 2015 Toyota Corolla exudes a sport-like performance. Whether the actual driving experience itself, or the interior features - the 2015 Corolla has everything the sport-seeking driver looks for in a sedan.

Plenty of Awards to Go Around

The 2015 Toyota Corolla is just as impressive as it was when the public was first introduced to it back in 1966. The Corolla is one of the highest awarded vehicles on the road today, and the 2015 model year already has a long list of accolades under its belt. When Toyota set out to design the 2015 Corolla, they made sure that the popular sedan would not only impress its critics, but would also provide a high quality ride to its drivers for many years to come.

Automotive awards are not just handed out to any vehicle for insignificant reasons, but rather earned through hard work and exceptional quality. The 2015 Toyota Corolla earned every one of following awards and accolades. Check out all that the 2015 Corolla has been recognized with so far this year.