Subaru first released the Impreza to the American automotive market in 1992.

Since its beginning, the Impreza has been offered in two different variations: A four door sedan, and a five door hatchback. The Impreza was also briefly available as a coupe, from 1995 until 2000, when the Japanese automaker decided to stick with the two most popular body styles. Subaru offers the Impreza with a standard all-wheel drive engine, and an affordable starting MSRP, making it stand out above other compact vehicles in its segment.

The 2015 Subaru Impreza is in the vehicle’s fourth generation, and has a long list of new updates for this model year. As Subaru does with all of its vehicles, safety is a number one priority on the 2015 Impreza. The compact sedan/hatchback has taken home numerous safety awards, and offers some of the most advanced safety technology in its class.

On top of safety, the 2015 Subaru Impreza offers a lot of standard and optional features, all at an affordable price. Those who value quality, safety, in-vehicle amenities, and cost savings, simply cannot go wrong with the 2015 Impreza. 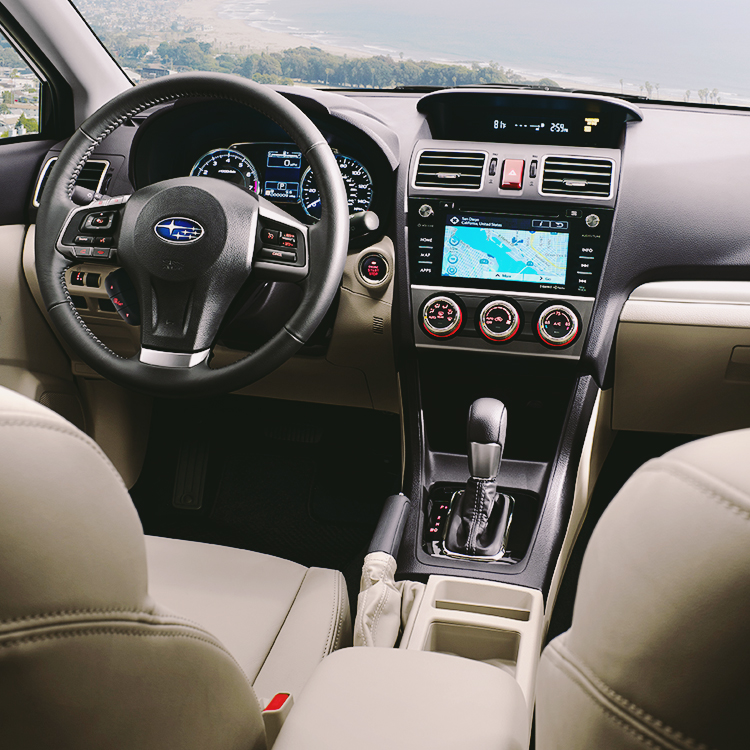 Subaru gave the Impreza an impressive list of upgrades and new design features for 2015. The sedan and hatchback variations both received changes worth noting, in nearly every category. Changes range from exterior appearance, to interior upgrades, and even new safety features. Discover the new Impreza, detailed in each section, below.

The 2015 Impreza received additional features to its interior, as well. One of the most important new aspects can’t be seen, but rather heard - or not heard. Thanks to advanced sound deadening material, improved sealing, and thicker side glass windows, the Impreza is noticeably a quieter ride.

All models now offer a touch-screen infotainment system, including a standard rear vision camera. An updated instrument cluster, new lighting features, and push-button start system with PIN code access, are all a part of the new 2015 Impreza.

New safety features are present on the 2015 Subaru Impreza, and vary depending on which trim level is chosen. Subaru’s EyeSight Driver Assist Technology is the most notable new safety addition to the Impreza lineup, and it includes steering-responsive fog lights, adaptive cruise control, pre-collision braking, lane sway / departure warning, and a pre collision throttle management system.

With the Impreza, Safety Comes First

Subaru is known for creating vehicles that not only appeal to the senses, but also to the highest possible safety standards. The Japanese automaker has succeeded in the Impreza, which was named a Top Safety Pick by the Insurance Institute for Highway Safety.

The Impreza earned the highest possible rating from the organization, in evaluations of front moderate overlap, front small overlap, roof crush, side impact, and rear impact collisions. The 2015 Impreza earned this award, along with six other Subaru models - making the brand the most awarded automotive brand on the market.

It is obvious that Subaru puts safety first, and that is no exception with the 2015 Impreza. Check out the top five ways that Subaru incorporates safety throughout the entirety of the all-new Impreza.

Most Affordable All-Wheel Drive Vehicle in its Class