After first rolling off of the assembly line back in 2007, the Nissan Versa has provided America with a completely affordable subcompact car. Traditionally offered as both a hatchback and a sedan, the current Versa is a restyled sedan, closely resembling the Nissan Sentra. The hatchback version of the subcompact car has transformed into its own model, the Versa Note.

The 2015 Versa Sedan is an affordable subcompact sedan that is unlike any other on the market. While most subcompacts offer great fuel economy and a fun ride, they rarely offer a long list of in-vehicle technology and amenities - the 2015 Nissan Versa does.

Starting at just $11,990 - the Versa is affordable on nearly every budget. While drivers will appreciate the low sticker price, they can get a lot more bang for their buck with the S Plus model, for just $2,000 more. The 2015 Nissan Versa truly stands apart from any other vehicle in its segment, sending competitors from Ford, Hyundai, and Kia, packing.

Spacious Interior - What may seem like a typo, is actually quite accurate. A subcompact car with a spacious interior seems too good to be true, but not for the Nissan Versa. With 14.9 cubic feet of trunk space, the Versa is equipped to get you and your gear to your destination - in one trip. Check out other standard and available options that drivers can choose for the interior of their Versa:

Sleek Exterior Styling - Just as the interior indicates, the exterior of the Versa also shows like a full-size sedan. With features such as chrome door handles, chrome grille accents, sleek lines, and a broad body, the 2015 Versa stands out in the crowded subcompact segment.

Unmatched Safety - As it is with any car, safety in the Nissan Versa is a top priority. With an advanced airbag system, seat-mounted and roof-mounted curtain airbags, and seat-belt and occupant classification sensors, every inch of the Versa’s cabin is set to a high safety standard. SL models also come equipped with a tire pressure monitoring system with Easy-Fill Tire Alert. One more feature for added peace of mind. 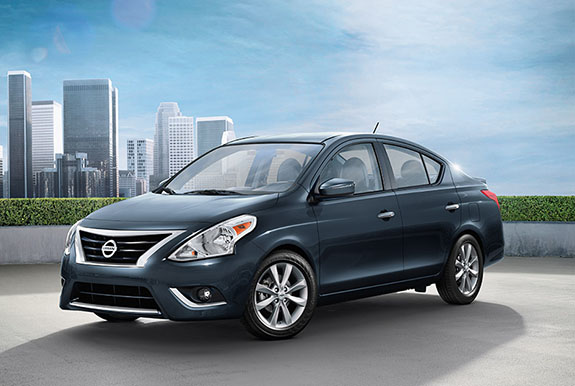 With four trim levels to choose from, it can be tempting for the budget-conscious driver to opt for the highest trim level of the Versa. While the SL model does offer a great suite of standard features, no other model in Versa’s lineup offers the same level of amenities for the price.

Starting at just $13,990, the Versa S Plus not only saves on initial cost from the base model, but also in fueling up at the pump. With an EPA-estimated fuel economy of 40 highway, and 31 in the city, the S Plus far surpasses the base S economy of 36 miles per gallon on the highway, and 27 in the city. That means fewer stops, and more money in your pocket. While you may pay a little more up front, you will easily recoup your money in the lifetime of your vehicle, by putting less money into the gas tank.

Now that initial cost and cost of ownership is out of the way, let’s get down to the fun stuff. The 2015 Nissan Versa S Plus has a great list of standard amenities, that the base S simply does not include. Check out the list below.

Mechanical: While the S and S Plus both offer the same basic 1.6 liter DOHC 4-cylinder engine, the difference comes in the vehicle’s drivetrain. The S Plus boasts an Xtronic continuously variable transmission, which helps the subcompact achieve those impressive fuel economy numbers.

Interior: The interior of the S Plus features a host of standard features meant for comfort, convenience, and practicality.

Unmatched by Other Cars in its Segment

If price was a contest, the 2015 Nissan Versa wins.

Along with initial MSRP, the cost of ownership with the Versa in terms of fuel savings is also the lowest. With 40 miles per gallon on the highway, the 2015 Versa will deliver you to your destination with fewer stops at the pump. See how the competition stacks up:

In a subcompact car, having a few extra inches of space can mean the difference between fitting it in, or leaving it behind. With 14.9 cubic feet of trunk space, the Versa has more than its competitors.

While your cargo rests comfortably in the trunk, your passengers can stretch out in the back, with more legroom than its competitors. With 37 inches of pure space for stretching out legs, the 2015 Versa has more backseat space than other vehicles in its class.

Lastly, the 2015 Nissan Versa offers a class-exclusive tire pressure monitoring system with available easy-fill tire alert. As the title “Class-Exclusive” implies, the Nissan Versa is the only subcompact car to offer this advanced technology.