Originally offered as a subcompact car, the Nissan Sentra has grown considerably since its 1982 debut, into a mid-size sedan. The Nissan Sentra offers a great entry-level price from other vehicles in its class, boasting high fuel economy ratings, and an impressive suite of standard features. As the Sentra has been around for a long time, it is currently in its eighth generation model year.

The 2015 Nissan Sentra offers drivers a unique segment perspective. With five trim levels to choose from, drivers will be happy with the top of the line SL model, that comes packed with standard features for under $21,000. The midsize sedan is one of the safest vehicles in its class, earning top safety accolades and awards from top institutions. With all of its superior value, it is no surprise that the 2015 Nissan Sentra far exceeds other cars in its class, such as the Hyundai Elantra.

Go All the Way with the 2015 Nissan Sentra SL

The Nissan Sentra is a midsize sedan that is well priced. With five different trim levels to choose from, drivers can spend just over $16,000, or well above $20,000. For those who are seeking a fun car to drive, packed with great convenience features, entertainment options, and a high level of comfort, the Nissan Sentra SL is the perfect option.

Starting at just $20,670, this affordable sedan offers high-end features that are expected to only exist on high-profile vehicle nameplates. The 2015 Nissan Sentra SL is an impressive value, loaded with great extras. Compared to the mid-level Sentra SV, the SL is only $2,000 more, and comes equipped with the following features, that drivers of the SV will completely miss out on.

SL drivers can also opt to add two different packages onto their Sentra which include:

This optional package features NissanConnect with Navigation and mobile apps and 5.8-inch color touchscreen monitor. Voice recognition for audio and navigation, and SiriusXM Traffic and Travel Link are both included

Whether choosing the basic 2015 Sentra SL, or adding one of the extra packages, drivers will definitely get a lot of car, with great features, for a very reasonable price.

Safer than Ever Before 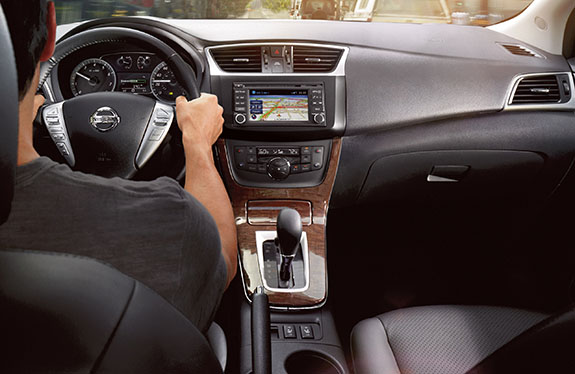 The 2015 Nissan Sentra offers great standard safety features, as well as available advanced safety technology. Ensuring that you and your family stay safe on the road is important, and Nissan recognized this fact when designing the 2015 Sentra. The Sentra Safety Shield helps ensure safety around ever turn, over every hill, and under every overpass. Check out some of the standard and available features that earned the 2015 Sentra a Top Safety Pick from the Insurance Institute of Highway Safety.

The Sentra is a Better Choice Than the Hyundai Elantra

Everything about the 2015 Nissan Sentra makes it stand out from the rest of the vehicles on the road. From the starting MSRP, down to performance and interior features, the Nissan Sentra hands down, has the upper hand.

Compared to the Hyundai Elantra, the 2015 Nissan Sentra is the obvious choice. The Sentra starts at just $16,480, while the Elantra starts at $17,250. This initial cost is definitely an important factor to consider when purchasing a car, along with the following categories:

The Nissan Sentra features an Xtronic Continuously Variable Transmission, unlike anything else available in the automotive world. The Hyundai Elantra does not even offer a traditional continuously variable transmission, which helps to explain why it’s fuel economy isn’t up to par with the Sentra.

Audio System - For short commutes to work, or long road trips, the sound system in a car provides the entertainment for the duration. With available Bose Audio System with eight speakers, the Sentra offers this enhanced entertainment option that the Elantra does not.