From the moment the Nissan Murano arrived in dealer showrooms, it was a true show stopper. The midsize crossover SUV embodied a vision and style unlike any the United States automotive market had seen. From 2002 until 2007, the Murano was the only crossover SUV in Nissan’s lineup, until it added the Rogue for the 2008 model year. Sized between the Xterra and Pathfinder, the Murano is positioned perfectly in the mid-size crossover SUV segment.

The Nissan Murano has taken home various awards and recognition over the years since it first entered production, and with it’s all new redesign for 2015, the Murano is not slowing down. Recently named “Best New/Redesigned Midsize Crossover” in Kiplinger’s 2015 Best Value Awards, the Murano is outdoing itself - and more importantly, the competition.

With a long list of new features from the exterior styling to interior appointments, the 2015 Nissan Murano boasts all-new Best-In-Class and Class-Exclusive features, and a long list of accolades and recognition from important institutions.

The 2015 Nissan Murano is taking a leap into the future, and drivers and car aficionados alike, are taking notice.

Everything about the Murano is different for 2015. Nissan kept the basic footprint and well-loved features of the Murano, and added even more to its appeal. The design of the exterior mirrors that of luxury automotive models like the BMW 3 Series, but accommodates more space inside, making it more practical. Take a look at the all-new 2015 Nissan Murano, and why it will be turning heads on the roadways for years to come.

New Exterior Design: With inspiration drawn from the aerospace industry, the 2015 Murano features an all-new stylistic body that is as aerodynamic as it is aesthetically pleasing. With a fluid profile, a shapely V-Motion Grille, and a floating roofline, the Murano shares a striking resemblance with a jet airplane.

All-New Impressive Interior: The interior of the all-new Murano is roomier, more open, and offers more features than any previous model year. Here are just a few of the standard and optional features available on the new Murano.

More Efficient Powertrain:  An all new 3.5-liter V6 engine sits under the hood of the 2015 Murano. Delivering 260 horsepower and 240 lb.-ft. of torque, the Murano is more powerful, and more efficient. Mated with Nissan’s Xtronic continuously variable transmission, the 2015 Murano achieves an EPA-estimated 28 miles per gallon on the highway, and 21 miles per gallon in the city. This lowered MPG rating is thanks in part to the 200 pound weight reduction from the outgoing model.

Beats Out the Competition with Class-Exclusive Features 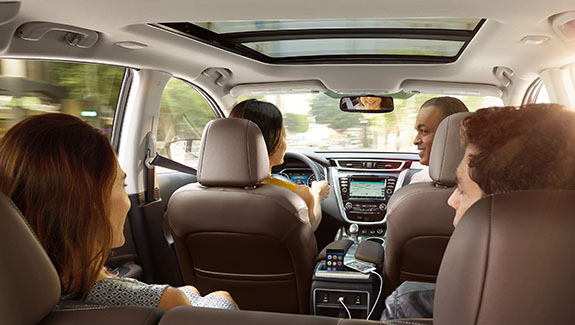 When designing the 2015 Murano, Nissan made sure that its crossover SUV would be able to stand up to the competition in big ways. Loaded with unique features like Best-In-Class cargo room and advanced technology, and Class-Exclusive available predictive forward collision warning system and total interior volume - it’s no surprise that the 2015 Murano is giving its competition a run for their money. Check out the other areas in which the Murano surpasses even the toughest competition.

More Awards Than Ever Before

With all of its new features, futuristic design, and new efficiency ratings, it should come as no surprise that the 2015 Nissan Murano has been earning plenty of awards along the way. Check out just a few of the accolades the midsize crossover has been collecting since it first hit American roadways: