The era of the green car is now, and the Nissan Leaf is one of the greenest options on the market. It even has the name "Leaf." You can't get much more earth-friendly than that!

The 2015 Nissan Leaf is a distinctive electric car that not only helps you do your part for the environment by reducing emissions and fuel consumption but that also helps you to save money (also by reducing fuel consumption). The unique look of the Leaf sets it apart from other compact hatchbacks -- something that attracts many buyers but can be too much for others. The Leaf is a unique car for unique people.

The Nissan Leaf is powered 100 percent by an electric engine. It is not a hybrid model that relies on a gas engine as a backup when the battery loses power. That means you will slash your gas budget to nothing when you drive the Leaf.

One of the biggest questions about electric vehicles is how much power the engine gets and how much range it has. In other words, how far will you be able to drive on the battery before it needs to be recharged.

The 2015 Nissan Leaf will get a range of 84 miles to a single charge. At first glance, this may seem low, but Nissan points out that American drivers only travel and average of 33 miles per day. The range is more than twice what most people drive each day, which means that most people would have to charge the vehicle every other day. You can charge the battery over night so that the car is ready to drive for work the next day.

The base model Nissan Leaf S comes with a 3.3 KW charger for the 24-KWh lithium-ion battery pack. The SV and SL models come with a 6.0 KW charger, which takes the full charging time from eight hours to five. You can also buy an optional upgrade for the 6.0 KW charger for the base model. Fast charging can also be used on either charger, giving the battery 80 percent life in just 30 minutes. That means that you can take the Leaf even on longer road trips.

Regenerative braking is used to extend the life of the battery. Whenever you brake or you are just coasting without pressing the accelerator, the system sends energy back to the battery.

The 2015 Nissan Leaf also gets an upgraded battery that performs better in hot weather. Even in the hottest temperatures, the battery won't drain as fast as previous versions.

With an electric engine, the focus is more on conservation than power, yet the Leaf still delivers modest numbers. The motor puts out 107 horsepower and 187 pounds per feet of torque. The Leaf can go from 0 to 60 mph in just over 10 seconds, and it has a top speed of 94 mph.

By changing the power train of a vehicle, you also change its design. An electric vehicle doesn't need as much front-end space, and it doesn't need the same setup as a traditional gasoline engine. This distinction is obvious in the 2015 Nissan Leaf, which has a sloping front end with no grille.

Instead of the grate that you would typically see at the front, there is a small door that provides access to the car's electrical components. The effect is a much more streamlined look than most cars have, but some can be taken aback by the deviation from the norm.

The shorter front end slopes into a large windshield, creating an aerodynamic design that improves performance and the electrical efficiency. Without as much wind drag, the car doesn't have to work as hard. Large head lights stretch from the nose nearly to the windshield. The lights also have vertical fins that enhance the aerodynamics.

The Nissan Leaf is a hatchback, but the rear doesn't appear to just be cut off like most hatchbacks. It swoops out into a rounded-off shape that nearly matches the front. The tail lights are also positioned vertically, running nearly to the roof.

The interior for the 2015 Nissan Leaf is a little more conservative than the outside, but it is cozy and inviting. A few unique details include a mushroom-shaped shifter and a futuristic-looking cluster display.

The 2015 Nissan Leaf is the complete package, offering a number of advanced convenience features. The Leaf comes with an infotainment system that includes a touch screen display, a navigation system, and an audio system that can connect to your phone or Pandora. 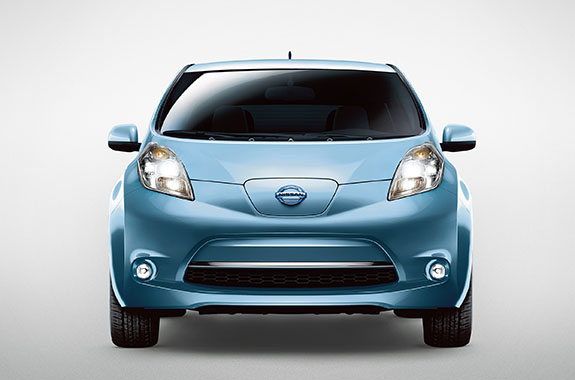 With all that the 2015 Nissan Leaf offers, it still manages to maintain its affordability. The base model 2015 Nissan Leaf starts at $29,860, and even the upgrades keep the car in the affordable range. If you want to try out the Leaf, you can lease it for around $310 per month, depending on your credit and where you live.

You can enjoy cutting-edge automotive technology on a budget. In fact, its affordability is what sets the Leaf apart from other electric vehicles that have more advanced features. It sells for half as much and still offers a comfortable ride and advanced features in one stylish package.

The Leaf is an excellent choice for families since it seats up to four adults and can be purchased on a budget. It also offers a quiet, comfortable ride with plenty of cargo space in the back. Check out the 2015 Nissan Leaf today!