First introduced in 2003 as a 2004 model, the Mazda3 is a compact car manufactured by the Mazda Motor Corporation in Japan. The entry-level hatchback or sedan has always been loaded with extra amenities and desirable features, that helped the Mazda3 stand out as a more sporty vehicle. The Mazda3 gained all of the expected technology and features over the year to keep up with the ever-evolving automotive market, but in 2014, the sporty car received a complete redesign with new trim levels, equipment, upgrades, and a more powerful engine.

Since its recent redesign, the Mazda3 has only seen minor updates, and the 2015 Mazda3 is no exception to that fact. The compact car is currently in its third generation, and is offered in several different trim levels, either as a sedan or hatchback variation. While each trim level offers great features, the best value lies in the mid-range Mazda3 Touring, which comes with a great list of standard features and amenities.

One of the elements that make the 2015 Mazda3 unique, is its impressive interior cabin, that is unlike any other on the market. The 2015 Mazda3 rounds itself out with the automaker’s advanced SkyActiv technology that not only helps the compact car gain overall efficiency, but is also helps set it apart from the competition.

The average driver in the United States isn’t concerned with in-vehicle amenities that are over the top, or unnecessary. Rather, a well-equipped vehicle with convenient features that add to the overall practicality of the car, are more likely on a driver’s priority list.

The 2015 Mazda3 offers differing trim levels, allowing for a basic base model, all the way up to a luxury, fully-equipped car. What lies in between the two of those extremes, is the 2015 Mazda3 Touring. A great option for the average American driver, who seeks a few added amenities, without breaking the bank. Starting at just $19,595, the Mazda3 Touring offers just enough extras, without going overboard.

Exterior Features: The exterior of all Mazda3 models generally look the same. The following features distinguish the Mazda3 Touring model from lesser trim levels, that do not offer the following as standard features:

Interior Amenities - As with the exterior, the interior of the 2015 Mazda3 Touring offers a unique blend of amenities that lesser trim levels do not. Check out what the Touring model offers, that the SV and Sport models leave behind.

Safety Features - The 2015 Mazda3 Touring offers drivers a few standard safety features that the SV and Sport models leave out. See what they include below:

Package Options - The Mazda3 Touring model gives drivers the option to add a unique technology package that no other trim level can offer. See what it entails below:

While all 2015 Mazda3 models offer their own unique blend of standard amenities and equipment, the Touring offers great overall value for what is included - and is all starts below $20,000.

Unique Interior Cabin Unlike Anything Else in its Class 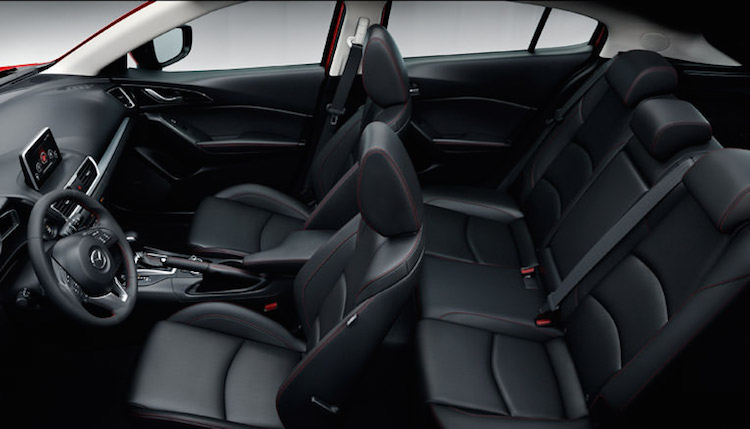 The interior cabin of the 2015 Mazda3 is not only practical, but it features a unique design that is both futuristic, and pleasing to the eye. Check out what makes the 2015 Mazda3 interior stand out from other vehicles on the road:

SkyActiv Technology Stays Ahead of the Competition

SkyActiv technology is Mazda’s unique, ground-up approach to vehicle engineering. It works by allowing all major parts of a vehicle to work together, while achieving impressive fuel economy and driving performance.

The 2015 Mazda3 is equipped with a 2.5-liter SkyActiv-G gasoline engine. This impressive configuration achieves an EPA-estimated 40 miles per gallon on the highway, and a powerful 184 horsepower. Even the toughest competition can’t compete with Mazda’s SkyActiv technology.

To help aid in overall efficiency, the Mazda3 has an available i-ELOOP regenerative braking system that helps to capture energy when the driver lifts their foot off of the accelerator. The stored energy is later used to power the car’s electrical components. Mazda3 models that are equipped with this technology, can expect a real-world fuel efficiency improvement by as much as five percent.

It is clear that the 2015 Mazda3 with SkyActiv technology is one of the most efficient vehicles in its segment, easily beating out the competition. For drivers who seek a fun to drive, sporty, efficient, and practical car, the 2015 Mazda3 is the clear choice among other vehicles in the same class.