The Kia Sportage has been one of the automaker’s longest running nameplates. It was first introduced to the American market in 1993 when Kia was in alliance with Ford and Mazda. The Sportage was designed with a Mazda Bongo engineering base platform, and shared many of the same components.

Since it’s first introduction, the Sportage has seen two other generations, and is now in it’s third.

The Kia Sportage was sold as a five-door crossover, or as a two-door convertible with a soft-top. The Sportage took a brief two-year hiatus in 2003, and returned in 2005 with a whole new look and feel. The new and improved Sportage has won several awards, and gained international recognition for safety and quality.

With the new design and quality of the 2015 Sportage, it outdoing even the toughest competition like the Ford Escape, surprising drivers around every turn. The elite SX trim available on the 2015 Sportage is the perfect option for those seeking sporty adventure in style.

One of the Most Affordable Crossovers Available 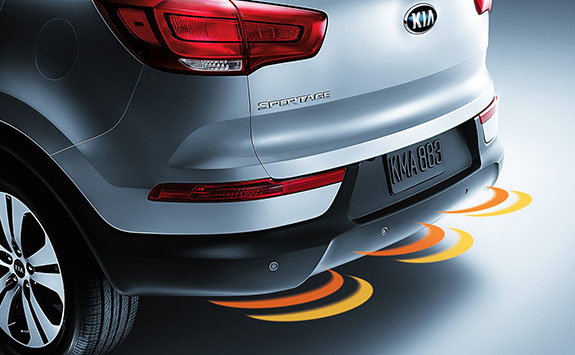 The 2015 Kia Sportage is no doubt a winner when it comes to affordability amongst other crossover vehicles available on showroom floors today. The 2015 Sportage LX starts at just $21,900, with the Honda CR-V, Ford Escape, and Toyota Rav4 all coming in around $23,500. Price isn’t the only thing that separates the Sportage from it’s competition.

Check out the other areas that the Sportage clearly has the others beat.

The Kia Sportage is one of the safest cars in its class. Featuring more standard safety features than the CR-V, Escape, or Rav4. The Sportage is the only car out of the four to earn the highest rating of 5-stars in the National Highway Traffic Safety Administration passenger crash test. It is also the only vehicle to come standard with front active headrests.

The standard alloy wheels featured on the Sportage make it a sure standout among the other vehicles that either don’t offer it at all, or only as an option. The 2015 Kia Sportage also comes standard with Satellite Radio, which none of the other vehicles offer. Drivers will also appreciate the option for dual illuminated vanity mirrors, and an auto-dimming rearview mirror, that only the Sportage can offer.

The 2015 Kia Sportage offers more all-around room where it matters. With a wider footprint and height, comes greater headroom and space to stretch out.

It’s obvious that when it comes to affordable crossover options, the 2015 Kia Sportage has all of the competition beat.

The 2015 Ford Escape is the most noteworthy opponent of the 2015 Kia Sportage. A lot of things help to differentiate the two crossovers, but when it comes right down to it - the Sportage is the clear winner.

Once again, the 2015 Kia Sportage is clearly the smarter choice. When it comes to what matters most - price, handling, protection, and safety - the Sportage has the upper hand over the 2015 Ford Escape.

Put the 'Sport' in Sportage with the SX Turbo Trim

If ‘sporty adventurer’ is on your resume, then the 2015 Kia Sportage SX Turbo is a must-have vehicle. Starting at just $28,100, the Sportage SX turbo is packed with everything needed to have the adventure of a lifetime. The Sportage SX has more standard features than any other trim level, and offers drivers a 260-horsepower turbocharged engine.

Check out the other features that make the Sportage SX a must-have addition to any car-lover’s garage.

Turn heads on and off the road with standard 18” alloy wheels, designed exclusively for the SX trim level. The standard auto light control, radiator grille complete with a bar across the front, beltline molding, and an optional panoramic sunroof, will have you driving in a sporty style previously unseen.

If comfortable luxury, and practicality are on your “must-have” list, then you will fall in love with the well-equipped interior of the Sportage SX. The standard UVO eServices Infotainment System with Infinity Surround Sound Audio System will keep you connected and sounding great. The standard rear-camera display, and back-up warning system will help keep you and your passengers safe.

The Sportage SX Turbo offers all the safety drivers have come to expect from Kia, along with some of the most advanced safety technology available in the automotive industry.