The Korean automaker made history when it first introduced it’s Kia Sedona minivan back in 2002. Not only was it the first minivan in the brand’s lineup, the Sedona also set a new standard in the segment for high quality, and loads of amenities, all for a low MSRP.

Since its conception thirteen years ago, the Kia Sedona has become a popular choice amongst American families. The Sedona has seen various facelifts and transformations, with a completely new look for the 2015 model year. The exterior design gives the minivan the aggressively stylish look that every driver wants, and features an interior unlike any other car in its class.

Most importantly, the 2015 Sedona blows the biggest minivan competitors out of the water - in both price and value.

Regardless of what your preconceived notions are about the minivan, the 2015 Kia Sedona will simply crush all of them. The Sedona has been redefining the minivan market since it first hit the American roadways in 2002, and it has only gained momentum since. 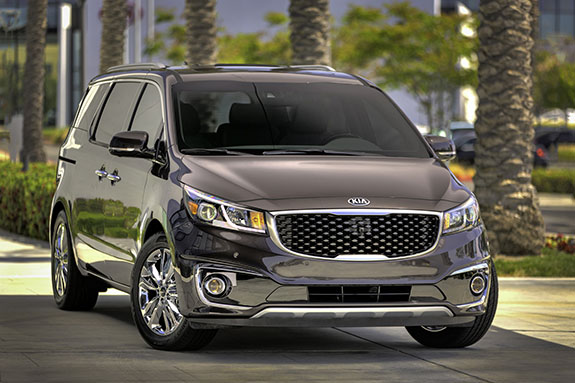 When designing the completely updated 2015 Sedona, Kia took no shortcuts. Incorporating a completely new exterior and interior styling, the Korean automaker took their pioneer minivan model, and moved it into the next century. What exactly separates the 2015 Sedona from its predecessor? As it turns out, quite a bit.

Complete with an entirely new front end, a wider track, and a front bumper that can only be described as “aggressive,” everything about the exterior of the 2015 Sedona is different from the 2014 model. The newest model also gained a lot of interior room, which gives the van a more substantial look and footprint. While it still resembles a minivan, the all new 2015 Sedona is a vehicle that even Dad will be proud to drive.

Out with the old, outdated steering wheel, dashboard, and control layout. In with the most technologically advanced, comfortable, and luxurious interior that the Sedona has ever seen. The leather-wrapped shift boot, a large center touchscreen, a completely redesigned steering wheel, and upgraded cabin materials, will have you driving in both comfort and style. Simply put, the interior of the 2015 Sedona exudes a modern luxury that previous model years never have.

The 2015 Sedona features a slightly smaller 3.3-liter engine compared to the 3.5-liter on the 2014 model. With higher horsepower and greater torque, the 2015 Sedona also out-does it’s predecessor with an EPA-estimated fuel economy of 18 mpg city, and 24 mpg highway.

The 2014 Sedona lacked in the technological department, but Kia is making up for that fact with an impressive array of standard and optional features sure to impress everyone. Need to keep something cold? The Sedona’s refrigerated glove box will keep your precious items on ice. The 8-inch color dash screen will help keep you connected and on the right path to your destination, and the rear-seat entertainment system will keep your most precious cargo happy. New safety technology, and other standard features like adaptive cruise control and keyless entry, are even more of what separates the 2015 Sedona from the 2014 model.

Taking Interior Comfort Beyond the Basics

Anyone who has driven inside of a minivan can attest to the importance that is placed on the level of comfort inside the cabin. Most minivans are good at sculpting an interior that is mostly comfortable, while able to accommodate multiple passengers and their everyday items.

The 2015 Sedona surpasses all minivan expectations when it comes to an interior that does more than just “accommodate.” From backseat footrests, to stain-resistant seat material - the 2015 Sedona has everything you have ever wished a minivan would have, and then some.

The minivan market may not be a large one, but it is competitive. Kia recognized this when designing the 2015 Sedona, and went above and beyond to ensure that it exceeded the competition in every way.

The 2015 Sedona costs about $2,000 less than both the Sienna and Odyssey, saving drivers money immediately by driving one off the lot. While the Sienna and Odyssey both offer only 36 month - 36,000 mile warranties, the Sedona comes with a 60-month, 60,000 mile Basic warranty. The Sedona also offers a powertrain warranty that is DOUBLE the competitors.

It offers more than the Sienna and Odyssey when it comes to interior amenities. The Sedona comes standard with Satellite Radio, lower console storage, and offers exceptional options that its competition can’t match.

Bottom line: The 2015 Kia Sedona outperforms in nearly every way. It has a lower starting MSRP, features more flexibility throughout the cabin, and gives passengers the feel of an SUV with the convenience of a minivan. The Sedona is the only choice when it comes to the minivan segment.