The Kia Rio is one of the South Korean automaker’s best-selling sedan. The subcompact car first rolled off the assembly line back in August of 2000, and has been offering drivers different options in body styles, and engine types ever since.

Now in its third generation, the Kia Rio has undergone multiple transformations, including the integration of Kia’s trademark “Tiger Nose” front grille.

The Rio has earned multiple award recognitions including the Semperit Irish Car of the Year award in December of 2011, and CarGuide’s Car of the Year in 2011. Kia has always put safety at the forefront, and thanks to that, the Rio is one of the safest subcompact cars on the road today.

The 2015 Kia Rio is widely considered to be the best value vehicle in its class, beating out competitors like the Ford Focus and Toyota Yaris for initial MSRP and cost of ownership. The 2015 Rio also gives drivers the option to add on high-class features at a low price point, and offers further flexibility with a five-door hatchback option.

When it comes to the 2015 Kia Rio, the bottom line is, no other car in its class can measure up to the quality, features, and price point. 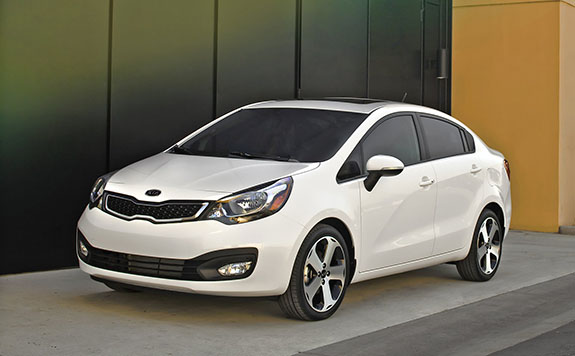 The 2015 Kia Rio is available in three different trim levels, the LX, EX, and SX. With the LX starting at just $13,990, the 2015 Rio can fit just about any budget. If you think that low cost means cut corners, think again. Each of the trim levels on the 2015 Rio offers just enough standard features and optional equipment, to satisfy any taste preference.

Check out each trim level and the standard equipment that comes with each.

With a starting MSRP of $16,690, the EX is the next step up in Kia Rio luxury. With standard remote keyless entry, power locks and windows,  and a 6-speaker sound system, The EX also comes with a standard automatic engine, while the LX has a manual standard engine.

The best-equipped option for the 2015 Kia Rio, the SX starts at $18,090, still making it an affordable option compared to competitor vehicles in its class. The SX features rear window defogging system, power adjustable mirrors, and 60/40 split-folding rear seats.

Regardless of trim level, the 2015 Kia Rio is the best-value choice for consumers looking in the subcompact car segment. More powerful than the Ford Fiesta, the 2015 Kia Rio also offers drivers a better warranty, and the option of a six-speed manual transmission that the Fiesta lacks entirely.

The Kia Rio also beats out the Toyota Yaris in many categories, including warranty, technological features like a standard auxiliary input, and most importantly - cost. Simply put, the 2015 Kia Rio is the best value subcompact car available in the North American automotive market today.

Get More for Less with Optional Extras 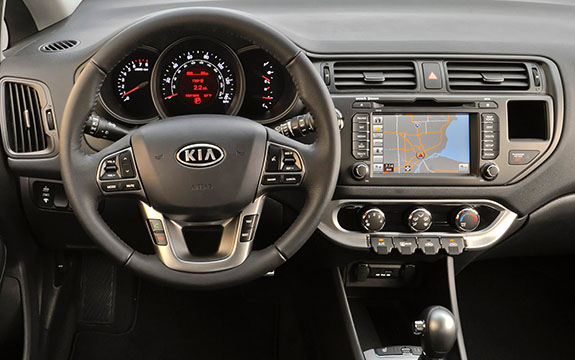 It is without dispute that the 2015 Kia Rio is packed with high-quality standard features, and offers drivers the ultimate customization with optional add-on features, found mostly in the luxury vehicle market.

Check out a few of the optional exterior features for the EX, that come standard on the SX trim level.

If highest-quality, top-of-the-line features appeal to you, then check out what comes optional on the highest Kia Rio trim level, the SX - starting at just $18,090.

No matter what trim level you decide on, the 2015 Kia Rio has the highest-end luxury extras that are offered as options to consumers.

Also Available as a 5-Door Hatchback

In case the 2015 Kia Rio didn’t already sound too good to be true, then check out the available 5-Door Hatchback version of the subcompact car. Perfect for the adventuring spirit, or the busy commuter on-the-go, the 2015 Kia Rio5 is a great option.

Starting only $200 more than the Kia Rio SX, the Kia Rio 5-Door SX offers drivers that little extra space that they didn’t know they always needed.

Despite the extra cargo capacity, the Rio hatchback option comes in at a total length of 159.3 inches, while the four-door version is longer with 171.9 inches bumper to bumper. More space with less length makes the Rio Hatchback appealing to those who want more out of their car, without necessarily having to carry around all of the extra weight.

Drivers of the 2015 Kia Rio sedan vs the Kia Rio five-door hatchback won’t save much in the way of dollars spent, but will certainly make up for it in the sporty, fun-to-drive option of the Rio. Aside from comparing other Rio options, the Rio hatchback saves consumers an average of $6,000 based on comparably equipped five-door hatchback options from other automotive brands.

The bottom line when it comes to the 2015 Kia Rio, is that for the price point, standard features, and efficiency, there is no better choice available in the automotive market today.