The Jeep Wrangler has been one of the most popular Jeep models since it was introduced nearly three decades ago.

It is the iconic Jeep. Bearing an eerie similarity to the very first Jeep ever produced -- the Willy MB during World War II -- the Wrangler is what many people think of when they think of Jeep. It has that distinctive Jeep look, and it has the rugged strength to scramble over nearly any type of terrain.

The Jeep Wrangler was not a descendent of the first Jeeps, known as the Jeep CJ, even though they look so similar. However, they do share design elements, such as the separate body and frame, the flat folding windshield, the option to drive without doors, and the rigid live axles.

The first Wrangler was introduced as a YJ model in 1986, and it shared the drive train and suspension of the concurrent Cherokee model. The first generation ran through 1995, and the Wrangler took a brief hiatus. It was reintroduced in 1997 as a TJ model with the classic round head lights, a coil-spring suspension for a more comfortable ride, and a more powerful engine.

The third (and current) generation was introduced in 2007 and is known as the JK model. The third generation got a total redesign that included an angled grille, a wider wheel base, and improved safety features such as stability control.

The 2015 Jeep Wrangler is the newest in the third generation of Wranglers, and it has improved upon the tradition with enhanced design and updated automotive technology.

When you buy a Jeep Wrangler, you aren't just getting a stylish and powerful vehicle -- you are joining a long tradition. 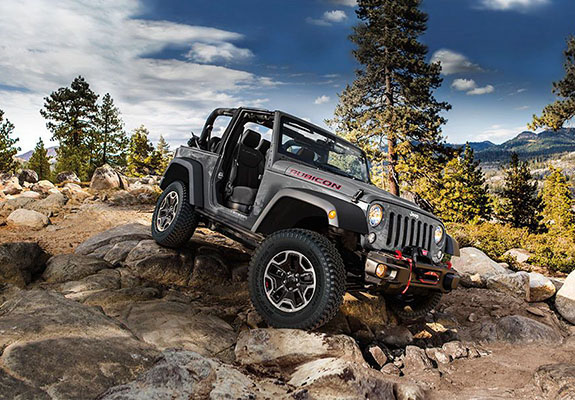 The Command-Trac system delivers even performance to all four tires, ensuring power and strength at every corner of the vehicle for improved handling and capability on the road.

The Rock-Trac system has a 4:1 low-gear ratio that allows you to get more power and torque even when you are traveling at lower speeds. It's an ideal system for off-roading since it allows you to crawl through mud or snow or to get out of it effortlessly.

The four-wheel drive systems are bolstered by heavy-duty axles and locking differentials and are powered by a 3.6-liter Pentastar V6 engine that puts out 285 horsepower and 260 pounds per feet of torque.

Between the 4x4 system and the powerful engine, the Jeep Wrangler is rated to conquer the toughest trails in the world. You'll slice through rain and snow effortlessly, and you'll drive over rocks like they're pebbles. 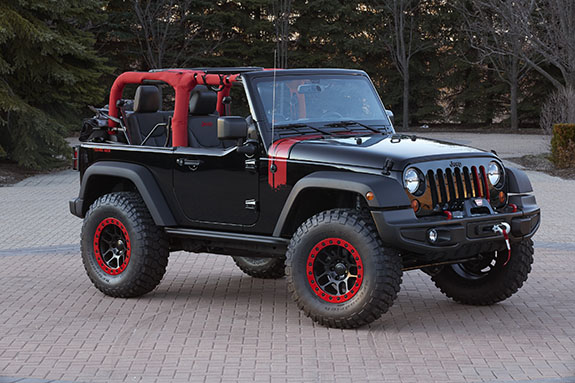 The 2015 Jeep Wrangler is stylish on its own, but it also offers many opportunities to customize it and make it your own. Jeep enthusiasts all over the world have made some stunning modifications to their Jeep Wranglers that have improved their performance or resulted in a unique design.

Some modifications are as simple as putting on a new soft top or getting a new paint job in a unique color, such as neon purple or a cool pattern like camouflage. Other modifications are more intensive and are aimed at making the Wrangler even stronger and more durable to push the limits of offroading.

Popular modifications include new bumpers that include protective bars or additional high-performance head lights. These after-market bumpers allow you to see further down the trail, and the bars protect against dents and other damage from going over the rocks or cutting through thick brush.

Other popular modifications include new air intake systems to improve engine performance, new exhaust systems to improve the roar of the engine, fender flares for an eye-catching look, running boards for easier access, and updated suspension systems for an improved ride.

If you're a bit of a grease head, you can make some of these updates yourself. However, you'll need to make sure you don't void your warranty in the process. Going to an authorized Jeep dealer or service professional can help you get the updates you want without the risk.

The people who own a Jeep don't just own a vehicle. When you buy a 2015 Jeep Wrangler or any other Jeep, you are joining an automotive family. You are entering a whole new world with its own culture and its own special traditions.

The first thing you might learn about after becoming a Jeep owner is the "Jeep Wave." When you are driving around town, you may be surprised to see another Jeep owner wave in friendly acknowledgement as you pass by. Some people may wave, while others may hold a hand up out the window like a tribute. Some just hold up the first two fingers pressed together over their steering wheel.

However they do it, it's an acknowledgement that you are in the Jeep family together. Make sure you return the wave when you see it!

Also part of the Jeep culture are regular meetups throughout the country. There are local meetups like car shows where you can chat with other Jeep owners. However, the major events are the Jeep Jamboree, the Easter Safari in Moab and some other trail runs.

You can go to these meetups to talk to other Jeep owners, to show off your awesome Jeep, to look at the modifications that other Jeep owners have made to their vehicles, and to enjoy some offroading fun together. At some events, you'll even get a chance to see the newest Jeep concept vehicles before anyone else.

When you buy a 2015 Jeep Wrangler, you buy more than just a new vehicle. You buy a piece of history, and you buy into a family unlike any other. Take a test drive of the new Wrangler today and discover what you've been missing.