Hyundai entered into the compact sport utility vehicle segment in 2004 with the Hyundai Tucson. The athletic and versatile Tucson was originally offered as a front-wheel-drive, or four-wheel drive CUV with a 2.0-liter engine.

The 2015 Hyundai Tucson marks the end of the crossover vehicle’s third generation, and while it did not undergo any major transformations, the Tucson has been upgraded in 2015 with more standard features than previous models. Drivers will appreciate the option to choose from three different trim levels, each offering unique features and convenient amenities.

The amount of standard features, along with Hyundai’s unique Fluidic Sculpture design, helps the Tucson beat out tough competition like the 2015 Kia Sportage. The 2015 Hyundai Tucson is as practical as it is fun to drive, and the third generation of the CUV is going out with a bang. 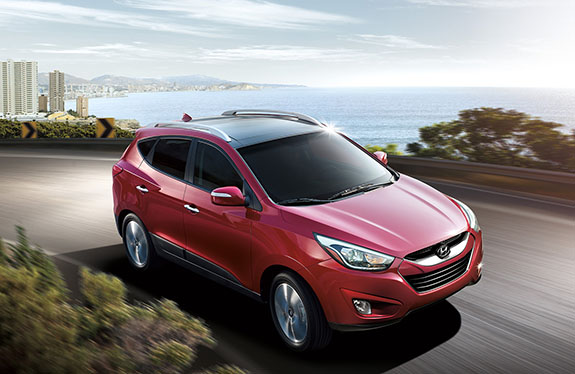 As with any vehicle, available and standard features are included on different model levels. The Hyundai Tucson is offered in three different model levels for 2015, including the base GLS, middle of the road SE, and top of the line Limited. Each model offers a unique list of standard features, and range in price from $21,650, to $26,450. Regardless of what your needs are, there is a Hyundai Tucson to match them.

GLS - The 2015 Tucson GLS is the base model of the popular CUV, and has a starting MSRP of only $21,650. Offered with a 2.0-liter front wheel drive engine with a 6-speed automatic transmission with SHIFTRONIC and Active Eco Assist, the Tucson GLS gets a combined fuel economy of 25 mpg. The list of standard features is quite extensive for the price, and includes the following:

SE - The 2015 Hyundai Tucson SE has a starting MSRP of only $23,700, and offers a slightly longer list of standard features than the GLS. The differences in the SE start under the hood, with a more powerful 2.4-liter engine that gets 182 horsepower, and 177 lb.-ft. of torque, for a combined fuel economy of 24 miles per gallon.

Limited - The highest level of amenities is featured on the 2015 Tucson Limited model, which starts off at just $26,450. It comes With the same engine and drivetrain as the SE, and the same safety features.

The 2015 Hyundai Tucson was built to stand out amongst even the toughest competitors. It achieves that goal, going above and beyond segment standards. Check out how the 2015 Tucson stands up to the 2015 Kia Sportage:

In those three categories alone, the 2015 Hyundai Tucson is the clear-cut winner. 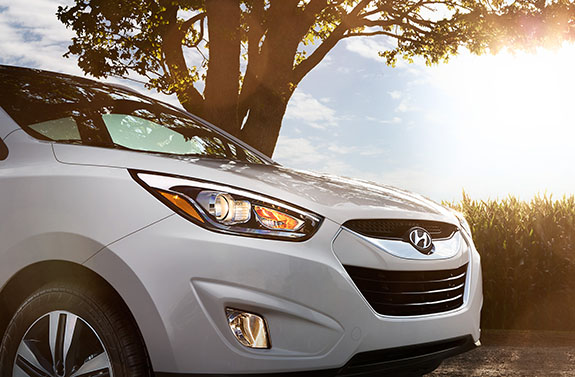 The 2015 Hyundai Tucson grabs the attention of all drivers on the road, and for good reason. The compact crossover looks more unique than any other crossover available, thanks to Hyundai’s Fluidic Sculpture design and engineering.

Hyundai designers based the Fluidic Sculpture design identity on various elements in nature, focused on the continuously adaptable and changing environment. This exact design philosophy is what gives the 2015 Hyundai Tucson its distinct, sleek, and luxurious exterior appearance.