The Ford Taurus was introduced to the public in 1986, and it revolutionized the American family car. Since it first became available in 1986, the Ford Taurus has been continuously offered ever model year. The full-size sedan has offered drivers a 3.0-liter V6, or a 3.4-liter V8 starting in the 1998 model year, but has been offering EcoBoost options since 2010.

The Ford Taurus has been one of the automotive brand’s best-selling vehicles since 1998, with over eight million sold. The 2015 model year represents the full-size car’s last production for its sixth generation, and while the sedan did not receive a complete overhaul for 2015, the Taurus has been given plenty of updates.

Thanks to four different trim levels, drivers have plenty of options to choose from when purchasing a 2015 Taurus, and each one offers more standard features than ever before. Innovations in automobile safety has come a long way, and the updated Taurus reflects that with advanced safety technology options and more standard safety features.

The 2015 Ford Taurus offers drivers Best-in-Class fuel economy, saving drivers more money at the pump than any of its competitors. 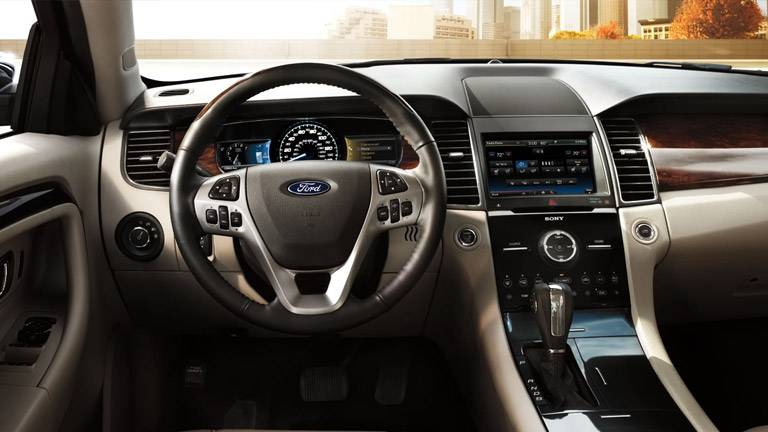 The base 2015 Taurus starts under $30,000, and the highest trim level, the Taurus SHO, tops out with a starting MSRP of $40,220. The SEL and Limited sit between the lowest and highest Taurus models, offering drivers a wide range of options for their money. Check out each one below, along with their standard equipment highlights.

It should come as no surprise that the 2015 Ford Taurus is one of the safest vehicles in its class. With a 5-Star Safety Rating from the National Highway Traffic Safety Administration, and Good ratings on all crash tests from the Insurance Institute for Highway Safety, the Ford Taurus has a  top safety rating from the two organizations that truly matter.

Thanks to new innovative safety technology, and a longer list of standard safety equipment, the 2015 Ford Taurus is ready to protect the people who matter most.

The full-size sedan gains safety points with the available lane-keeping system, and a blind-spot information system with cross-traffic alert. Optional adaptive cruise control with forward-collision warning and brake support, are also offered to help make the 2015 Taurus the safest it can be.

Best-In-Class Fuel Economy Leaves the Competition at the Pump

Check out how the 2015 Taurus stacks up to the competition for best fuel economy.

While these numbers may seem like small margins to compare, they mean the difference between making it those extra miles to a gas station, or being stranded on the side of the road.

The 2015 Ford Taurus and it’s Best-In-Class fuel economy will keep drivers and passengers on the road longer than any other full-size sedan.