The Ford Mustang is arguably the most recognizable car on American roadways.

The 2015 model year marks the pony car’s fiftieth anniversary, and Ford is celebrating by offering an all-new ride, style, and performance in its sixth generation Mustang.

The American-built muscle car made it’s debut at the United States Grand Prix in Watkins Glen, New York, and has been impressing car enthusiasts ever since. The Ford Mustang is not only the original pony car, it is also the only car in its class to be in an uninterrupted production over five decades.

No other muscle car has been able to keep up with the Ford Mustang in the past, and with the updates for 2015, no other car will come close in the future.

Packed with more power than previous model years, and an all-new engine option, the Ford Mustang is surprisingly more fuel efficient for 2015. Regardless of budget, drivers will have options to afford the 2015 Ford Mustang, thanks to the eight different trim levels.

Starting from the low twenties, and topping out at the low forty-thousand dollar price range, there is a Mustang for every driver and budget.

All New Performance for 50th Birthday 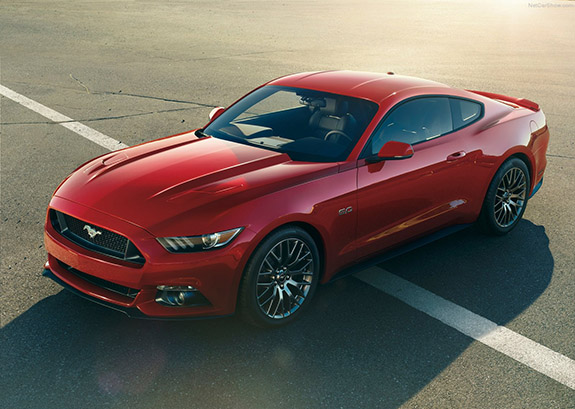 It’s no secret that the Ford Mustang has always been a powerhouse of a pony car. The 2015 model year is no different. The upcoming Shelby GT350 is a force to be reckoned with, and the optional 2.3-liter EcoBoost engine will put performance in first place on all other models.

Not only is this new powertrain option one of the more fuel efficient engine choices, it is also one of the most powerful. Better efficiency does not mean less power with the brand-new EcoBoost 2.3-liter engine. In fact, it means quite the opposite.

Delivering a staggering 310 horsepower, and 320 lb.-ft. of torque, the EcoBoost 2.3-liter does anything but disappoint drivers looking for a top performance engine under the hood of their Mustang. If that isn’t impressive enough, the same engine gets an estimated 21 miles per gallon in the city, and 32 on the highway - for a combined fuel economy of 25 miles per gallon.

Power no longer means more stops at the pump, with the 2015 Ford Mustang equipped with the EcoBoost 2.3-liter engine.

A lot of engineering and planning went into designing the upcoming Shelby GT350. Designers at Ford worked to combine power, performance, and luxury all under one roof. They succeeded, equipping the all-new Shelby GT350 with more features than ever before.

Under the hood of the GT350 sits a 5.2-liter V8 engine that produces over 500 horsepower, and 400 lb.-ft. of torque. Thanks to the world-class TREMEC 3160 6-speed transmission, this Shelby does not mess around.

For a more dynamic performance-fueled driving experience, the GT350 is equipped with a MagneRide damping system that adjusts itself thousands of time per second. Built on top of the all-new lightweight chassis and Michelin Pilot Super Sport Tires, the GT350 will be able to keep up at top speeds, without missing a beat.

Just as important as going, engineers worked to create the perfect braking system to stop the Shelby at a moment’s notice. Front and rear Brembo cross-drilled two-piece brake rotors are engineered for performance. 15.5-inch rotors up front, and 14.8-inch rotors in back, are substantial in size to help the GT350 stop when drivers need it to.

Thanks to engineered components such as wider aluminum front fenders, and a lightweight aluminum hood, the GT350 has the perfect aerodynamics built right in. Front and rear fascias, splitter, rear valance with integrated diffuser, and rocks all work together to keep the GT350 performing at peak capacity.

The Mustang GT350 is the perfect example of the evolution of Ford’s engineering process. This specifically-engineered machine provides a world-class driving experience, unmatched by any of the competition.

Trim Level Options for All Budgets

Owning the most iconic sports car in America isn’t as far-fetched of a dream as it used to be. In fact, drivers can get behind the wheel of a brand new 2015 Mustang for under $24,000. That number is impressive, and entirely reachable for those looking to reach their goals.

On the other hand, those looking for top-of-the-line performance in every possible way, can choose the GT Premium Convertible model of the 2015 Mustang, for under $42,000.

Check out the details of each trim level below, and what separates the base model of the Ford Mustang, from the premium version of the same pony car:

With a starting MSRP of only $23,800, Mustang lovers can afford this base model, while still keeping hold of some of the bells and whistles. Check out what this trim level includes below:

Starting at just $41,800, this Mustang offers drivers the most standard features for the price. For those wanting ALL the bells and whistles, this is the perfect model. Check out all it includes below:

Regardless of which 2015 Mustang you drive off the lot in, each model offers great standard features and available equipment, with the signature power and performance Mustang drivers have come to expect.