The Ford Focus has been the American automaker’s best-selling compact car since it first rolled off the assembly line in 1999.

Currently on its third generation, the popular compact car has been a favorite among American drivers looking for a well-performing car, that required less stops at the gas station. The Ford Focus delivers on both counts, and continues to do so for the 2015 model year.

The 2015 Ford Focus may not be a complete overhaul, but the refreshed version of the vehicle was a welcome change. The 2015 Focus offers class-exclusive safety technology that the competition simply cannot offer.

Drivers can opt out of the standard engine option by choosing a more economical EcoBoost variation,that offers more power and better fuel economy than ever before.

The 2015 Ford Focus is rounding out the third generation of the compact car, and while it did not receive a complete redesign, the sedan has undergone significant modifications.

With a slightly new exterior look, new interior design elements, and updated technological features, the 2015 Ford Focus is still recognizable as the vehicle’s third generation, but has certainly begun the process of growing up.

The redesigned front and rear bumpers offer a more refined look, while the horizontal chrome grille features a trapezoidal shape to keep up with aerodynamics, and growing trends. The front spoiler and bonnet are redesigned, along with the Focus’ new front headlights. Two new exhausts complement the rear of the compact sedan, and the refresh is rounded out with 18-inch alloy wheels.

All of the new design elements featured on the interior of the new Focus prove to be both functional, and aesthetically pleasing. All-new seats offered a more comfortable and refined look, while the cabin is given an upgraded feel with satin chrome detailing throughout. Adjustable cupholders, and a glove box with improved accessibility, add to the overall convenience of the Focus’s cabin. All-new for 2015, drivers can choose great optional standard features such as a heated leather-wrapped steering wheel.

Arguably the most important aspect to consider when purchasing a new car, Ford delivers in this category with the 2015 Focus. The rear-view camera has become a standard piece of equipment on all models of the compact car, and also includes antilock brakes, side curtain airbags, and stability control. Advanced safety features such as lane keeping assist system, and blind spot warning system are also made available to drivers.

The standard engine for the 2015 Ford Focus changes slightly from the outgoing model year. But for 2015, Ford opted to include an optional 1.0-liter three-cylinder engine, complete with a six-speed transmission. This EcoBoost engine comes turbocharged, and delivers more performance than expected.

Variable valve timing and direct injection are both important components to this new engine, which is also expected to attain a better fuel economy than past models. In fact, the EPA estimates that the 2015 Ford Focus will receive up to 42 miles per gallon on the highway.

Drivers will also be able want to check out the 2.0-liter EcoBoost engine offered in the performance-focused 2015 Focus ST. This hot hatchback features a hefty 252 hp and 270 lb.-ft of torque, along with unique features like a sport-tuned suspension and torque-vectoring control. 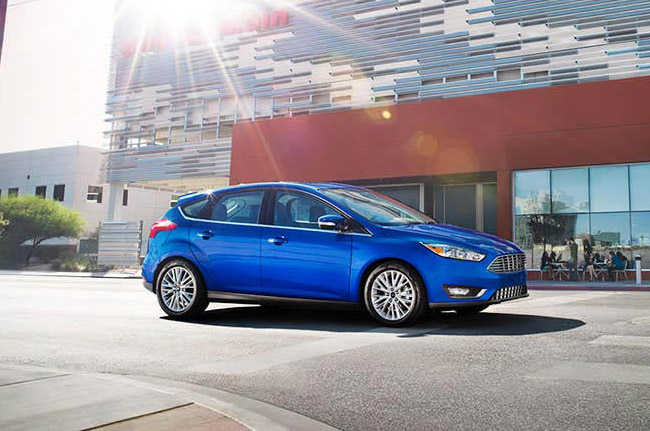 The 2015 Ford Focus does not disappoint when it comes to important safety features!

Packed with more standard features than previous models, the face-lifted compact car also offers more advanced safety feature options than ever before. Some of that technology is even class-exclusive, making it stand out even more from the competition.

The 2015 Ford Focus goes far beyond basic offerings, such as the standard rear-view camera, however. The vehicle also allows drivers to choose from advanced safety features, many of which are class-exclusive to the nameplate.

Thanks to special features like lane keeping assist system and blind spot warning system, the 2015 Focus is keeping drivers safer than ever before. Vehicles in the same category and price range do not offer such advanced safety systems, but Ford engineers made it a point to bring the forefront of safety to the 2015 Focus.

With a starting price of only $17,170, it’s no wonder that the 2015 Ford Focus is standing out from its competition. More affordable, with more standard and available features, the Focus is a worthy contender in the compact sedan automotive segment.