When minivans were losing their luster, and cool-guy reputation, Ford provided consumers with a sleek and adventurous alternative: the Ford Explorer.

Originally offered as both a three- and five-door model, the Explorer has since seen numerous revisions and changes with its body style. Throughout all of those modifications, the mid-size sport utility vehicle is one of the most popular crossovers to hit the American market, and one of the longest running nameplates in its segment.

The crossover received a major makeover for the 2011 model year, and the 2015 Explorer is a modified version of that first Explorer in its fifth generation. The three-row cabin features enough room to sit seven comfortably, with plenty of legroom.

When it comes to safety, Ford did not cut corners with the 2015 Explorer. In fact, it is one of the safest vehicles in its segment. The all-new XLT appearance package allows drivers to differentiate themselves from the crowd, and do so in style at a great price.

The 2015 Ford Explorer also offers class-exclusive technology and optional features that the competition doesn’t even have on their radar.

2015 Explorer is as Safe as SUVs Come 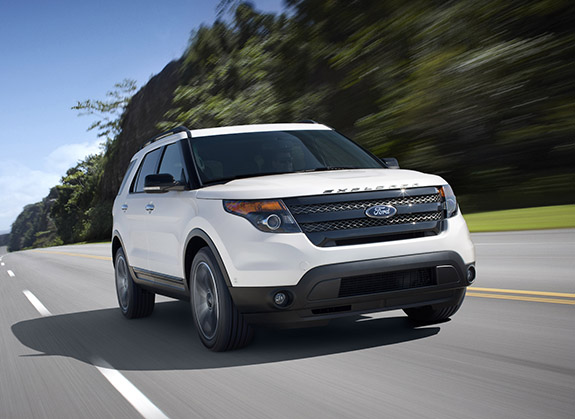 It is no secret that Ford put everything they had into the Ford Explorer, to ensure that it offers drivers and passengers the highest safety standards. The National Highway Traffic Safety Administration recognized Ford’s efforts, giving it the highest five-star overall safety rating for the 2015 model year.

Check out the slew of standard safety features that ALL 2015 Explorer models come with:

These standard features are enough to keep everyone safe on the road. For even more advanced safety features, drivers can opt for the highest trim level, the Explorer Sport.

Check out the advanced safety features that come standard on the Explorer Sport for 2015:

Whether choosing the base model of the 2015 Explorer, or the top-of-the-line trim, the crossover SUV is well-equipped to keep drivers and passengers safe on the road.

For drivers looking to make a statement, the mid-level XLT trim level appearance package is the perfect way to make that happen.

The front grille and mirror caps are covered in dark magnetic paint, and the 20-inch machined-face wheels feature black painted pockets, to give the SUV a mysterious, powerful look. Body-color door handles, black roof rails, and the word EXPLORER is featured on the front hood of the vehicle, helping to bring the look together. The new XLT package is meant to give the mid-level Explorer the look of the more expensive Explorer Sport model.

For those seeking a sleek, stand-out vehicle, without breaking the bank, the XLT package is the perfect solution. On top of the required 202A package on the Explorer, the XLT appearance package costs only $1195 on top of the vehicle’s MSRP.

With both of those added packages, the Explorer exudes luxury on the inside and out. Heated leather front seats with suede inserts, contrast stitching, auto-dimming rearview mirror, floor mats with special badging, and the MyFord Touch infotainment system, all come along for the ride.

Consumers can drive off the lot in a front-wheel-drive Explorer XLT for just $37,490, with all of the above features.

Technology that the Competition Can’t Compare With 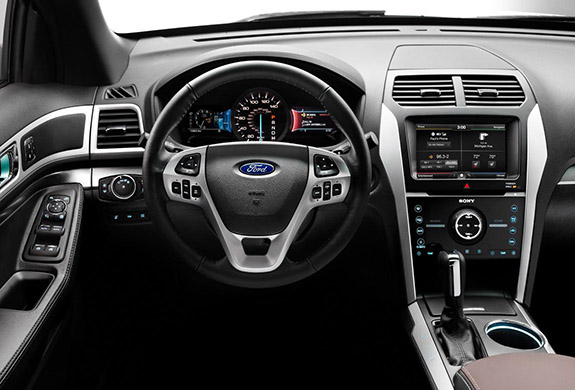 The 2015 Ford Explorer has a lot to be proud of. While the SUV may not have received a full transformation for this model year, it has plenty of integrated technology to set it apart from the crowded segment.

Check out some of the available features on the 2015 Ford Explorer below:

In the event of a crash, these seat belts feature airbag technology that will be deployed to help prevent injuries and save lives. In everyday use, the seatbelts look and feel like the everyday thing.

This class-exclusive technology allows users to fold the third row of seating down flat, with the touch of a button. With a normal seating position, stow position, or fold position, the Ford Explorer can accommodate any amount of cargo. This technology is available on the Limited and comes standard on the Explorer Sport model.

SYNC with MyFord or MyFord Touch

Keep eyes on the road and hands on the wheel, with this Ford-exclusive system. Drivers can use their phone with the push of a button, or connect on the go with the available WiFi capability.

In less than five minutes, the steering wheel in an equipped Explorer can go from -4 degrees fahrenheit to 74 degrees. Drivers and front seat passengers will also appreciate the heated or cooled front seats.

The available power liftgate can be opened or closed with the press of a button on the key fob, instrument panel, or on the bottom of the tailgate with the tap of a fot. Drivers can also set a designated height for the liftgate to extend to, which comes in handy in low-ceiling spaces.

Start your vehicle with two simple clicks with the available remote start system. Standard on Limited, Sport, and available on XLT models. When the weather outside is hot, the cabin automatically cools itself to 72 degrees, with the cooled seats set to high. When the outside temperature is cold, the cabin heats up to 72 degrees, and turns the heated seats to high, and the rear defroster and heated mirrors are activated.