The Ford Edge is a midsize crossover SUV that the Ford Motor Company added to its lineup back in 2006.

Debuting at Detroit’s North American International Auto Show in 2006, the Edge was Ford’s first entry into the crossover utility market. The five-seater received a complete redesign for 2015, bringing the popular vehicle up to speed in both design and technological features.

One of the aspects of the all-new Edge that makes it truly stand out, is its smoother, more sleek driving experience and towing capabilities.

The 2015 all-new Ford Edge offers drivers four trim levels to choose from: SE, SEL, Titanium, or Sport. Each Edge has a long list of standard features that build upon one another for the ultimate midsize crossover machine.

With a starting MSRP of $28,100, drivers can choose between a FWD and AWD option. The FWD packs an impressive 30 mpg on the highway, while the AWD comes in close with a 28 mpg highway rating. Each offers an Intercooled Turbo Premium Unleaded 2.0-liter Ecoboost I-4 engine. The SE comes with a great list of standard features from both the interior and exterior.

Ford’s exclusive SYNC system, and an audio input jack also comes standard. The SE also comes with a slew of standard safety features that include:

Starting at just $31,500, this second-level Edge packs all of the same features that the SE offers, along with the following:

It offers everything the previous two trim levels have, along with the following:

The highest-end trim level of the Edge starts at just $38,100. It come standard with a 2.7-liter EcoBoost V6 engine with a 6-speed SelectShift automatic transmission with paddle activation. Unique leather-trimmed sport seats with a perforated sueded inserts are just one of the interior features that make this trim level unique.

Whether opting for the most economical choice of the Edge, or the top-of-the-line Edge Sport, drivers will enjoy the amount of standard features that come with each trim level, all for great starting MSRPs.

All New Design to Fuel Passion on the Road 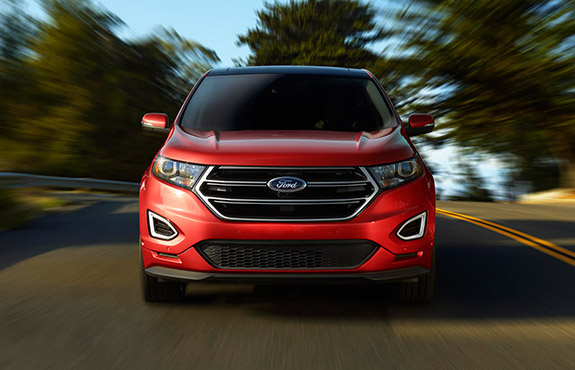 The 2015 Ford Edge was completely redesigned from previous model years, and offers drivers a unique elegance that other models could not. From the standard gas-saving EcoBoost engine, to the twenty new technological features, the 2015 Edge has it all.

Every aspect of the Edge was given an update, whether it was small or big. Check out each category and how Ford revolutionized each one, below:

The 180-degree front camera, enhanced park assist with perpendicular and parallel parking with pull-out aide, side park sensors, are just a few of the new technologies that Ford built into the 2015 Edge.

Larger than previous models, the new Edge offers more interior space than ever before. The sleeker, more athletic design complements the new performance enhancements and overall increased power. The Edge also wears a new grille, new headlights, LED taillamps, and an active grille shutter for improved fuel economy. All around, the 2015 Edge is recognizable as Ford’s midsize crossover, but with completely new attitude.

Completely redesigned for an upscale look and feel, everything about the interior of the 2015 Edge is refined. WIth softer, higher-quality materials than previous models, the Edge also features a quieter ride, and a throw-back to traditional buttons for audio and climate controls. Seating within the cabin is more comfortable than previous models, and the interior has more space to stretch out, thanks to the added dimensions to the overall vehicle.

Improved Handling for an Improved Drive

Three engines are available in the all-new 2015 Ford Edge, with two of them completely new to the lineup.

The 2.0-liter EcoBoost four-cylinder and the 2.7-liter EcoBoost V6 are both new options for drivers to choose from, while the 3.5-liter V6 remains the same. SelectShift six-speed automatic transmission with race-inspired paddle-shift activation work perfectly with each engine option to deliver the best performance and handling.

Each trim level is available as either a front-wheel-drive or all-wheel-drive vehicle, furthering the customization of the vehicle.