The Chevrolet Volt is one of the first mass-produced plug-in electric cars available in the American automotive market.

It was first introduced in late 2010 with the 2011 model year, and has sold over 88,000 units since. The Chevy Volt runs on pure electric battery until the charge drops down to a predetermined threshold, at which time its internal combustion engine takes over, and the compact car runs on gasoline.

Regenerative braking technology is also employed in the 2015 Chevrolet Volt to help turn stored energy from braking, into energy that can be harnessed to fuel the electric motor. While some may confuse the Volt with a hybrid vehicle, the Volt is an electric car through and through, offering drivers the option to use a gasoline reserve in between plug-ins.

The Volt is the first electric car that can also run on gasoline, and the 2015 Volt offers drivers more technology, range, and convenience than ever before. Despite being less the five years old, it has won over the hearts and minds as America, and has even snagged a few prestigious awards in the process.

Volt owners report staggering fuel savings each year, and the cost to purchase the environmentally friendly car can be drastically decreased thanks to government tax incentives. Taking time to plug in a Volt isn’t an issue, as Chevy has designed the car to be ready to go in as little as four hours of charging.

Since it was first introduced to the market, Volt drivers have driven over 150 million electric-only driving miles - saving a ton of gasoline in the process.

Saving Millions of Gallons of Gas 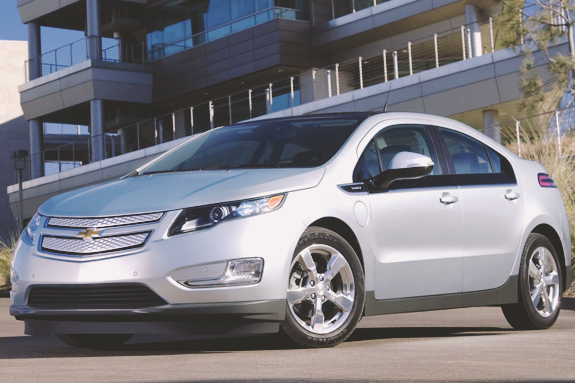 The EPA-estimated range for the 2015 Chevy Volt is 98 MPGe, or miles per gallon equivalent. This basically means that if the Volt were to run entirely on gasoline alone, it would achieve around 98 miles to the gallon.

The estimation by the Environmental Protection Agency is impressive, but what is even more attention-getting, is the fact that most Volt owners either meet or exceed that estimation.

Exactly how much is that saving the average Volt owner at the pump each year?

Chevrolet reports that the average 2015 Chevy Volt driver is going 900 miles between fill-ups of the gas-powered electric motor, amounting to about $1,300 a year in fuel costs. Saving money at the pump is crucial in today’s economy, where gasoline prices are at an all-time high.

Since it was first introduced in late 2010, the Volt has saved nearly 17 million gallons of gasoline. With the nationwide gas average around $2.38 per gallon, that’s around $40 million saved. Some Volt owners report only filling up a few times each year, taking full advantage of the all-electric driving capability of the 2015 Chevy Volt.

If the staggeringly low cost-of-ownership isn’t enough to sway a consumer to switch over to the electric-side, perhaps generous tax incentives would do the trick.

The 2015 Chevy Volt has a starting MSRP of $34,345. Government incentives will typically shave another $7,500 off the top of that price, and California residents will see even more of a tax incentive with an additional $1,500 in savings.

What starts out as a car in the mid $30,000 price range, can end up costing buyers only $25,345. The deep savings at the pump will further drive down the cost to own a Chevy Volt, making it an affordable car to purchase, as well as to own.

Can Be Charged in as Little as Four Hours

Many prospective Volt owners can be turned off by the fact that they have to find the time to charge their Volt before use. Chevrolet recommends that Volt owners charge their vehicle on a daily basis for optimal efficiency, it can run smoothly with entire months going between charges. The frequency that a Volt needs to be charged depends on how often it is driven, and how many miles it is driven.

The 2015 Chevy Volt comes with a standard 120V portable charge cord that can be plugged into an average outlet, and reach full charging capacity in about 10 hours. For those who would like to optimize the time it takes to charge their Volt, an optional 240V charging station can be installed in the drivers  home, taking the charging time down to only 4 hours.

For those who are concerned about the cost of charging their Volt at home, Chevrolet estimates that it costs only about $1.60 per day in household electricity, which is the same annual cost as running a common household appliance.

The Volt offers drivers the lowest transportation “fuel” cost by harnessing electricity, and running on a back-up gasoline motor. With a charge time of only 4 hours, and a daily cost of under $2, it seems like a no-brainer to be driving a Chevy Volt.

In a regenerative braking system, energy used when the driver applies the brake, is stored and used by the generator of the motor. Every time that the driver of the 2015 Chevy Volt takes their foot off the accelerator pedal, the Electric Traction Motor switches to a generator, harnessing the energy into power.

In a conventional gas-powered braking system, the excess energy from braking is converted into heat by the friction of the brake linings, and wasted. The regenerative braking system takes what would be wasted energy, and uses it.

The regenerative braking system on the Volt saves drivers millions of gallons of gasoline, helping make the 2015 Volt even more environmentally friendly and low cost to operate and own.