The Chevy Cruze may be a relatively new member to the Chevrolet family, but its popularity in the compact car market promises that it will be around for years to come.

Making its first appearance in the North American market back in 2008 as a four-door compact sedan, it replaced the Chevrolet Cobalt from the lineup. Since its debut it has sold over 2.5 million units, making it an undeniable front-runner in the compact car segment.

Since the Cruze is so new to the automotive scene, it has only seen one generation—that is, until now. The all-new 2015 Chevrolet Cruze represents the first overhaul of the compact car, making if the first model year in the Cruze’s second generation.

The 2015 Cruze may be a compact car, but it is packed with luxury features that some full-size cars can’t even contend with. The turbo diesel version of the Cruze is leading the charge for increased fuel economy, and the high-end trim level is both affordable, and brimming with features typically reserved for a much higher price point.

This little car is easily one of Chevrolet’s shining stars, and the specifications of the Cruze, coupled with the large-volume sales numbers, work together to confirm that fact. 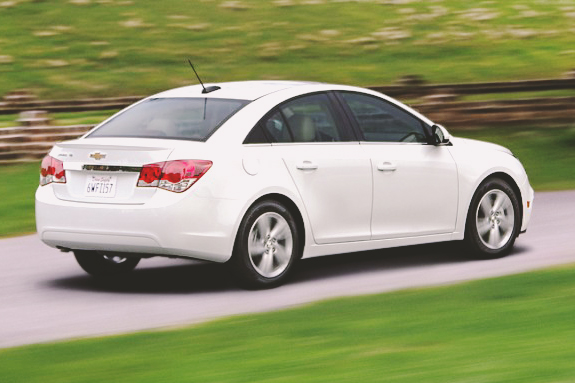 What exactly differentiates the 2015 Cruze from its predecessor?  As it turns out, the answer to that question is quite a bit. The overhaul from the 2014 Cruze to the 2015 model year was significant in many different ways. While some changes are small and may go unnoticed, they are as important as the obvious modifications made by Chevrolet.

Leading the charge in fuel economy, the 2015 Chevy Cruze Turbo Diesel model leaves its competition behind, filling up once again, at the gas station. The VW Jetta TDI Diesel is the vehicle most comparable to the Cruze Turbo Diesel, and the Cruze outperforms in all areas.

Is it possible for Chevrolet to pack full-size luxury into a compact car? The answer: YES! The 2015 Chevy Cruze may be small, but what it has under the hood and inside the cabin, is BIG. Starting at just $24,270, the LTZ trim level offers extraordinary luxury, standard features, and technology beyond measure.

If luxury, convenience, safety, and comfort are important to you - look no further than the 2015 Chevy Cruze LTZ. Boasting the ECOTEC 1.4L turbo engine, this Cruze is powered by the best the compact car market can offer. Check out just how impressive the LTZ trim level is: