Corvettes are just cool, no matter their color or who sings about them. There are dozens upon dozens of songs that have been written about the Corvette. They are the quintessential American sportscar. Instantly recognizable and celebrated for its ultimate performance, speed, and style.

The 2015 Chevrolet Corvette Z06 is absolutely no exception. Roaring in at 650 horsepower from its 6.2-liter V8 engine, this is an iconic muscle car just begging to be driven. Every cent is worth the starting MSRP of $79,000. Isn’t it time you muscled up to the 2015 Corvette? You know you want one.

The Z06 Strong-Arms the Competition

This year’s Corvette Z06, available as either a coupe or convertible, is the newest muscle car from Chevy and it is both road and race ready. An epic performance machine, the Corvette earned more awards in the Le Mans Series than any other racecar.

What makes a Corvette a Corvette is the fact that it stands out from the rest. For instance, this year’s Z06 is, in fact, the only muscle car to get 650 horsepower with 650 lb.-ft. of torque in the entire industry.

Chevy claims that the new Z06 is the quickest and most capable Corvette that it has made to date. And whether you drive the racetrack or the road, you can track how far you push that horsepower on your drives with the only industry-exclusive Performance Data Recorder, which allow you to record your drives on high definition video with telemetry overlays on playback. You’ll be able to brag, not only about the car itself, but your prowess behind its wheel.

It can be driven with either a seven-speed manual or brand-new eight-speed paddle-shifter automatic transmission. For extra fun, the Z06 offers five driver-selected driving modes: Weather, Eco, Tour, Sport, and Track.

Each one comes with twelve performance variables, ideal for any driving experience. Three of the dozen include Magnetic Selective Ride Control, Performance Traction Management, and Electronic Slip Differential. With the driver-centric 2015 Z06, you’re in complete control. Basically you’re the boss of this boss car.

Every external enhancement on the 2015 Z06 has been made in the interest of improved aerodynamics. With a better grip than the Stingray, thanks to wider flared fenders and larger wheels wrapped in Michelin summer-only Pilot super Sport ZP tires, the Z06 handles better and looks aggressive on the road.

This is thanks, in part, to the fact that the rear has been widened by 80 millimeters and the front by 56 millimeters. Who knew that wider could look so sexy?

But just because it’s wider doesn’t mean it’s heavier. In fact, this Corvette is extra lightweight, thanks to its aluminum space frame, carbon fiber hood, and removable carbon fiber roof panel. Between its lighter construction and svelte styling, the Z06 performs even better with increased cooling via brake-cooling intakes and wider grille outlets situated in the striking mesh grille.

The hood vent has been made larger to vent hot air from the engine and add to the car’s downforce. Extra cooling features present in the form of bigger front fender vents and air blades on the rear fenders, as well as standard front and rear brake-cooling ducts and bigger rear-fascia openings. 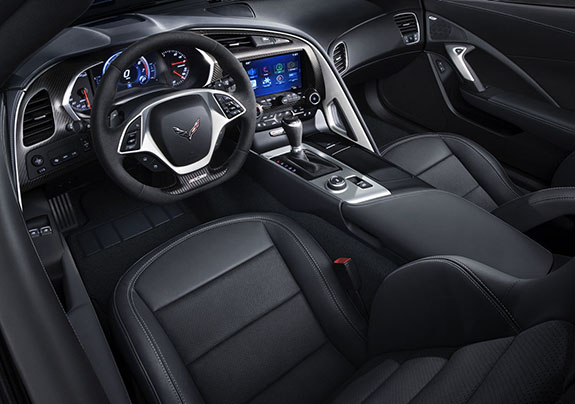 When you examine the interior of the Z06, you should automatically think: craftsmanship.

Between the precise stitching, luxurious materials, and parts made of the same carbon fiber found on actual racecars, it’s obvious that Chevy is focused on details. They say the devil is in the details, but so are the differences setting the Z06 apart from the rest.

The Z06 offers an assortment of interior color schemes, featuring greater variety than the interior options on the Stingray. Nappa leather is available and can cover either of the two seating options, the standard GT for extra support and comfort or the Competition Sport seats, bolstered for razor-edge race track performance. Colors range from blue, dark gray, adrenaline red (ooh, la la!), jet black or Kalhari - sort of a burnt orange hue.

Have Wireless, Will Travel

A 4G LTE Wi-fi signal, courtesy of Chevrolet’s OnStar system allows you to connect up to seven personal smart devices, no matter where you go. More powerful than any other wireless hotspot or smartphone, Chevy OnStar keeps you and your passengers seamlessly connected to the outside world, even if you’re trying to escape from it.

Chevy MyLink operates on an eight-inch high definition color touch-screen, retractable and controlled by the steering wheel, for hands-free convenience and safety. Able to recognize hand gestures and voices, the Chevy MyLink in your Z06 allows you to communicate hands-free, play music via Pandora, and utilize the available OnStar and optional navigation systems.

Since you might want to set your recorded drives to music, the Z06 is equipped with a top of the line Bose audio system, able to blast SiriusXM Satellite Radio, or whatever else you want to hear via audio input jacks and Bluetooth 3.0 wireless technology. Might I suggest Prince?

Make the Z06 Your Own 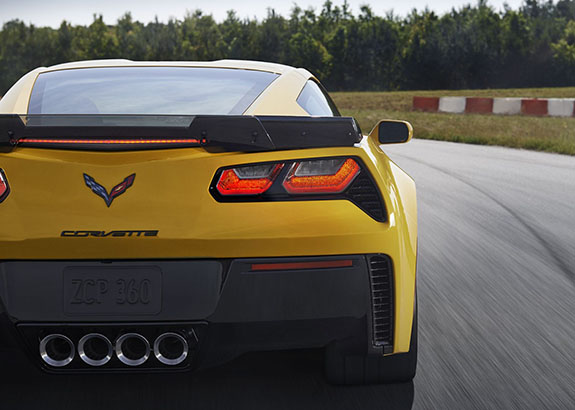 Not just by purchasing one, but by customizing it from the impressive selection of accessories offered by Chevy, including the Performance Downforce Package for optimal driving performance.

Or, up the exterior ante of your Z06 by selecting from the Decal/Stripe package and available wheel options, in Silver Painted or Satin Black with Red or Yellow Stripe. No matter how you outfit your Z06, once thing is certain: this car is a game changer.

Why not change up your game and get behind the wheel of the all-new and better than ever 2015 Chevrolet Corvette Z06? After all, life is short. Make the journey count.