The Camaro is one of the most classic and recognizable American cars ever produced. With over five million sold since it was introduced in 1966, it's one of the best selling cars of all time and one of the longest running nameplates in the automotive industry.

Now, nearly 50 years after being introduced, the muscle car is still going strong with the 2015 Chevrolet Camaro.  The last of the fifth-generation first introduced in 2010, the 2015 model is powerful, refined, and has a great selection of trims to attract all types of buyers.

But even as the sixth-generation Camaro revs up to launch soon in 2016, here's a look at why the 2015 Camaro is one of the best performance cars available today.

Ending the Fifth Generation with a Bang!

It might be a shock to find out, but the Camaro models produced from 1967-2002 were all based on the same GM F-body platform. It wasn't until Chevrolet revived the Camaro for the 2010 model year that a new platform, codenamed "Zeta," was used to produce the fifth generation of the classic muscle car.

Before it was even officially released, however, the fifth generation Camaro made a big splash in the industry.  First with multiple concept cars from 2006-2008 and second with a starring role in the Transformers movie franchise, which began with the first film in 2007.

Since its official release, the fifth generation Camaro has gone through a lot of refinement. Its interior received a lot of technical upgrades for LT and other higher trim levels, including the introduction of a standard touchscreen dash unit, starting with the 2013 model year.

The exterior styling was enhanced with the 2014 model year, adding a more aggressive look to the front grille and completely redesigning the rear to match other Chevy models.

Throughout its six year run, the fifth gen has also seen some amazing new trim levels, special edition models, and upgrades to make it more appealing to every type of performance car buyer. Notable additions, like the ZL1 and Z/28 models, helped boost sales and continue to keep it on top of muscle car sales charts for years.

With the 2015 model, the best of the best trims, packages, and other options are available. The improvements made over the past five model years also make the 2015 the most reliable muscle car available today.

Choosing Between the V6 and V8

For performance car buyers, the V8 is the ultimate dream. You not only get power and a beautiful engine note, you get the respect from other drivers on the road.

The V6 is, of course, also the most affordable of the two engine options. Starting at just $23,705 for the 1LS trim, buyers with a small budget can still get the the driver's seat of a brand new Camaro.

If you are looking for that true performance, and have the budget to afford it, upgrading to the V8 available on the SS trim is a no-brainer. With 426 hp and 420 ft-lbs. of torque with the manual transmission and 400 hp and 410 ft-lbs. of torque with the automatic transmission, you'll be doing 0-60 mph runs in just 4.7 seconds. (That can be reduced to just 4.3 seconds with the optional 1LE package!) 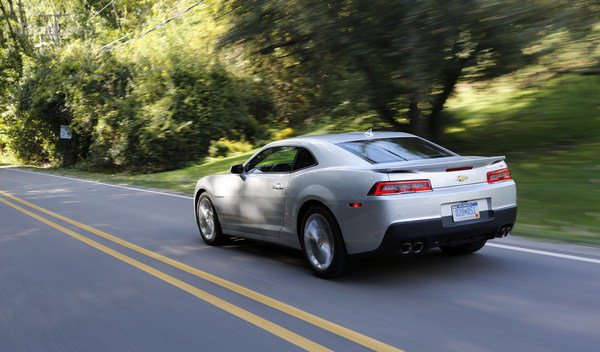 Watch the 2015 Camaro SS with the 1LE Performance Package go head-to-head with the 2015 Ford Mustang GT with its own performance package. Despite the Mustang being a generation ahead, the Camaro shows the pony who's boss!

With an MSRP of over $55,000, you could buy two loaded LS (V6) models for the price of one ZL1. Unfortunately, the ZL1 packs four times as much fun as the base V6 model, so you'd actually be on the wrong end of that deal! The ZL1 is Chevy's top-of-the-line performance-focused Camaro, and just from its appearance you can see why.

Equipped with a monster 6.2-liter supercharged V8 making 580-hp, the ZL1 might come off as a straightaway hero. But thanks to a performance suspension, front and rear stabilizer bars, magnetic ride control, and Brembo performance brakes, the ZL1 is just as much a beast around corners as it is in a straight line!

Topping the ZL1 in terms of overall performance is tough, but Chevy had a different goal in mind with the Z28. Instead of focusing on making the biggest, baddest muscle car around, the company wanted to make a Camaro that could tackle tracks like a champion.

And after being named Motor Trend's "Best Driver's Car" of 2014, which pitted the Z28 up against luxury sports cars, such as the Jaguar F-Type Coupe and Porsche 911 Turbo S, Chevy knew they had created something absolutely special. If you can get your hands on a Z28, don't let it go anytime soon!