The Cadillac ATS is the automaker’s luxury compact sedan, that features seating for up to five, and an interior that exceeds all expectations.

The ATS is engineered and produced by General Motors, and is manufactured in the United States, in Lansing, Michigan. The Cadillac ATS is the smallest offering in the luxury brand’s lineup, sitting just under the Cadillac CTS for size. The ATS made its debut in the United States in early 2012, and has been selling here and overseas ever since.

The 2015 Cadillac ATS sedan received various updates for its newest model year, ranging from interior changes, to exterior revisions. The 2015 ATS also feature three advanced engine options, and an impressive array of other technology that ensures the utmost performance from the compact sedan.

With all of the impressive updates, technology, and engine options added for 2015, one of the most interesting changes for this model year is the addition of the  ATS Coupe. This two-door version of the ATS features a wider front and rear than the sedan, and has other great features for the sporty coupe style. 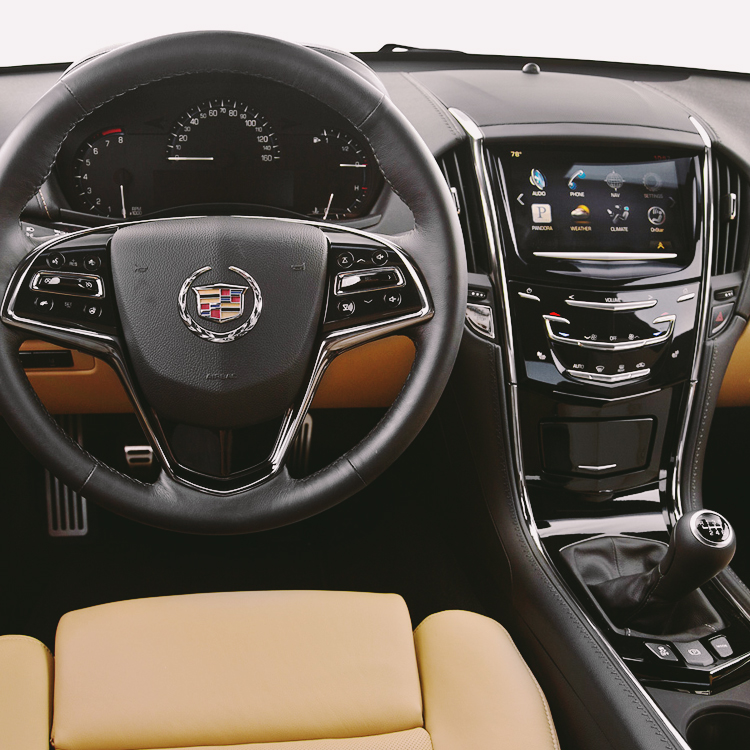 One of the first changes made to the 2015 Cadillac ATS may not be noticeable to some drivers. The Cadillac badge that sits on the front grille of the ATS goes wreath-less for 2015. The new badge design drops the old wreath image, for a more modern look. Aside from this small, yet significant change, the 2015 ATS also underwent various other changes for its newest model year.

Some of those changes can be seen below:

Aside from the new badge, the front end of the ATS features a new styling that leaves the compact car feeling even more luxurious.

With a newly redesigned grille, and wider front fenders, the 2015 ATS takes on a more substantial stance, and a striking first look. Drivers are also able to choose from two new exterior colors for 2015, including Crystal White Tricoat, and Dark Adriatic Blue Metallic.

The interior of the 2015 ATS received minor changes, including new interior color and trim combination options. Technology-wise, the 2015 ATS is incorporating OnStar 4G LTE connectivity with built-in Wi-Fi connection, to help drivers and passengers stay connected on the go.

A unique Powermat wireless phone charging dock is also built into the new ATS, for maximum convenience. Cadillac’s CUE infotainment system is also standard on the 2015 ATS, which includes text message alerts, and talk-to-text technology. The ATS includes passive entry as a standard feature on all models, as well as a tilt and telescoping steering column on Premium trim level models.

Minor updates for 2015 safety features on the ATS include a lane change alert system, and a lane keep assist system, both of which are added to optional safety package available for 2015.

The 2015 Cadillac ATS was designed with the driver in mind. The compact sedan delivers an exceptional balance of precision, control, and power, for an overall incredible drive. The 2015 ATS features three different engine choices, for customizeable power and performance. Check them out below:

The brand new ATS Coupe is a welcome addition for 2015. The coupe version of the ATS sedan features many of the same elements, with a few differentiations. To start, the coupe is only offered with two engine options - the 2.0-liter Turbo, or the 3.6-liter V6.

The most noticeable difference comes from the model name. The ATS sedan is a four door version of the compact car, while the coupe offers drivers a two door option. Because of its two door configuration, the coupe offers its driver and front passenger a bit more room up front - by about two inches. Both versions of the ATS offer the same amount of rear leg room.

Both the 2015 Cadillac ATS sedan and coupe are exceptional compact cars, with luxury amenities, quality craftsmanship, and a dedication to perfection.